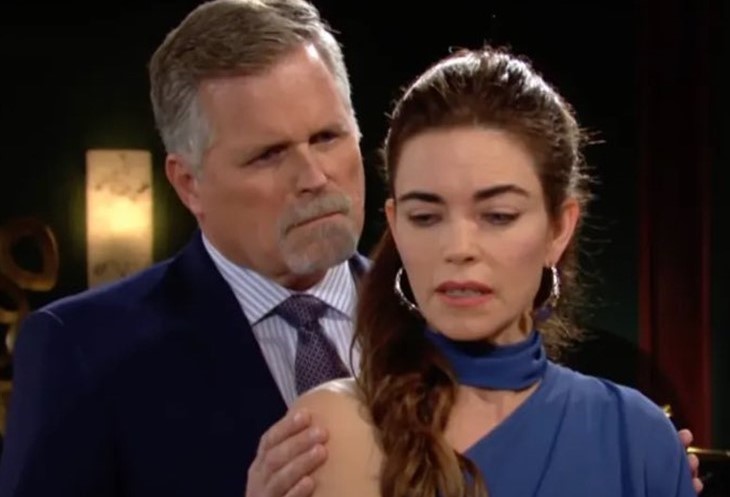 The Young and the Restless (Y&R) spoilers reveal that Victor Newman (Eric Braeden) retaliates. Ashland Locke (Robert Newman) convinces Victoria Newman-Locke (Amelia Heinle) that Victor’s claims are a lie. However, Victor shows proof of Ashland’s cancer con. When Victoria sees the receipts and other evidence, she will be forced to take off her rose-colored glasses.

The Young And the Restless Spoilers – Ashland Locke’s Damage Control

Y&R spoilers reveal that Michael Baldwin (Christian LeBlanc) found proof and statements from three different doctors of Ashland’s deception. Victor confronted Ashland and gave him an ultimatum. However, once Ashland got word that the three doctors have been “taken care of,” he attempted damage control with Victoria.

Ashland told Victoria that Victor is convinced he faked his cancer. Ashland made it sound as if Victor was intentionally trying to get rid of Ashland. Even though this shouldn’t make any sense to Victoria, she is desperate to believe her “Prince Charming.”

During the week of March 7, Victor will retaliate against Ashland. Victor’s team is already searching for Michael, who has mysteriously vanished. In the meantime, Victor will get his hands on receipts that prove Ashland lied about having cancer. It is teased that Victor will have no choice but to show Victoria the evidence.

The Young And the Restless Spoilers – Victoria Newman-Locke Faces Reality

The Young and the Restless spoilers reveal that Victoria has ignored so many red flags regarding Ashland. Victoria must get the sense that she’s being scammed. However, she desperately wanted to find love. So, it’s too hard for her to think that the man she married is deceiving her.

However, when Victoria sees the proof, she will no longer be able to deny the truth. Victoria will be devastated, shocked, heartbroken and enraged. At the same time, she will have to make amends with the people in her family she blasted.

The Newman family is known for their conflicts and rifts. However, when it comes down to the end of the day, they protect their own. Ashland will fight to take Newman-Locke for himself and destroy Victor’s legacy. However, it seems that Ashland won’t just be battling Victor. Ashland will have to face the entire Newman family as they stand united.

It is clear that Ashland will lose in the end, but how will he go down? Will he go to prison, end up penniless, be exposed as a fraud, disappear or perhaps be murdered? Share your theories and remember to keep watching the CBS soap to find out what happens next.