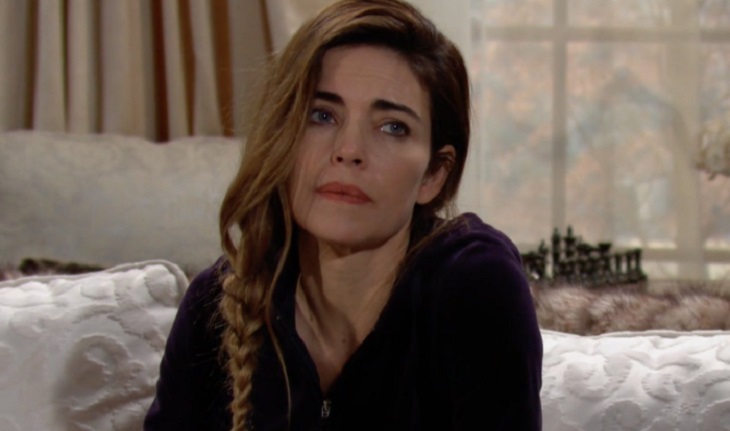 The Young and the Restless spoilers reveal that Victoria Newman-Locke (Amelia Heinle) backs out of her own plan. It happens after Ashland Locke (Robert Newman) refuses to dig deeper to expose Adam Newman (Mark Grossman). Victoria admits to Nikki Newman (Melody Thomas Scott) that Ashland could be sincere. Has Ashland already won, or could there be a twist?

Y&R spoilers reveal that the Newman family desperately tried to get Victoria to see the truth about Ashland. Eventually, Victoria was no longer able to turn a blind eye. Instead of admitting to lying about cancer and using Victoria, Ashland walked away from the marriage. However, once Victoria was away from her family, Ashland swooped in to plead his case.

Victoria produced a plan to get revenge while protecting the Newman family legacy. Victoria is using Adam as a scapegoat. So far, Ashland has taken the bait. However, that all changes on Tuesday, April 12.

In Tuesday’s episode, Victoria walks into her office and finds Ashland already there. Ashland is lost in thought, which makes Victoria anxious to find out what he’s thinking. Ashland says that he doesn’t want to expose Adam. Ashland claims that he’s not going to sink to Adam’s level.

Victoria tries to assure Ashland that this is the only way to clear his name and expose Adam. However, Ashland refuses to participate anymore. Then, Ashland mentions the complicated Newman family dynamics and sees how the situation is taking a toll on Victoria.

The Young and the Restless spoilers reveal that Victoria is left alone while Ashland goes to get coffee. Once Ashland leaves, Nikki comes in and bashes the “Locke-ness Monster.” Nikki can see that Victoria is upset by something Ashland has said or done. That is when Victoria says that Ashland isn’t taking the bait as expected. When Victoria tells her mother the whole story, Nikki vents about Ashland’s manipulation.

However, Victoria’s face says it all. Then, Victoria tells Nikki that she believes Ashland is sincere.

The Young and the Restless Spoilers: Manipulation or Sincerity?

There is no question that Ashland is a master manipulator. Ashland might have a feeling that he’s being set up. So, this is a curveball for Victoria. Of course, there is also the possibility that Ashland never expected to fall in love with Victoria and is determined to hold onto his marriage.

Meanwhile, Adam confronts Ashland and offers him a deal that will be hard to turn down. How Ashland responds could change the entire ball game for “Ashtoria.”