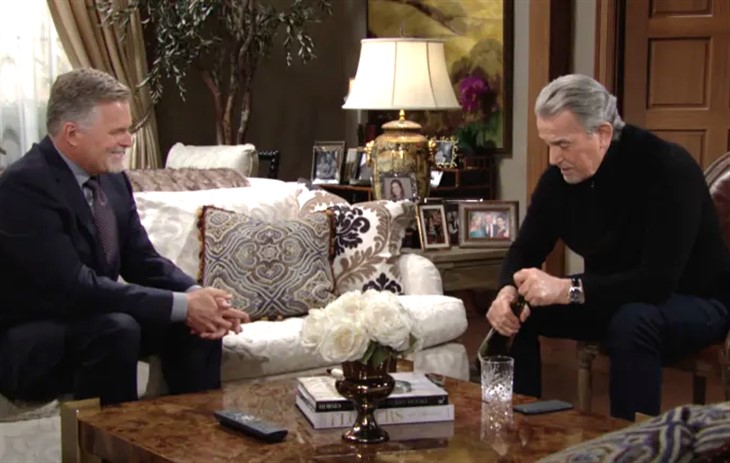 Viewers of The Young and The Restless will recall that while Victor Newman is worried about Ashland Locke trying to take more control at Newman/Locke, Victoria Newman-Locke (Amelia Heinle) wants some reassurance about his health. Victoria knew of his cancer diagnosis when she married him and now she worries he is taking on too much at work and it would be bad for his health and wear him down too much.

Viewers of The Young and The Restless will see Ashland tell her there is nothing to worry about and that he has never felt better, but she continues to demand reassurance, especially when it comes to redefining their roles in the company. When the merger first happened, he had been in poor health and there had been the sense that his cancer was terminal, so Victoria took the lead at the new company. Besides, Victor would never have agreed for a non-Newman to have power over the company even if he is married to Victoria!

Viewers of The Young and The Restless will recall that even though Victor has both Michael Baldwin (Christian LeBlanc) and Adam Newman (Mark Grossman) investigating Ashland and his cancer claims, Victoria doesn’t know of his investigations. Victor didn’t want her to know until he had something indisputable, considering her trust in her husband and her belief that he wouldn’t lie to her, especially not about his health concerns!

Even Adam questioned why Locke would fake something like that when Victor tasked him with keeping an eye on him and his actions and reporting back to him anything suspicious or unusual! Viewers of The Young and The Restless will recall that they made it as a couple in spite of his lies about his past, revealed by both Nick Newman (Joshua Morrow) and Billy Abbott (Jason Thompson). For that reason, Victor is keeping both his suspicions and his deep dive investigations of Locke’s health secret from his daughter until he has something that he cannot deny!

Michael now sends a video to Victor of this doctor, verifying that he was paid a huge sum to falsify Ashland’s medical records – he had been fired because he didn’t agree with what was going on there. Victor has to remain careful and proceed with caution as how to handle and what to do with this explosive information; it turns out that Ashland Locke doesn’t have cancer at all! Victor decides to approach Ashland with what he has and ask him to leave the marriage and the company, but Locke plays with fire trying to maintain Victoria’s trust, leading to a confrontation that could blow father and daughter apart forever!