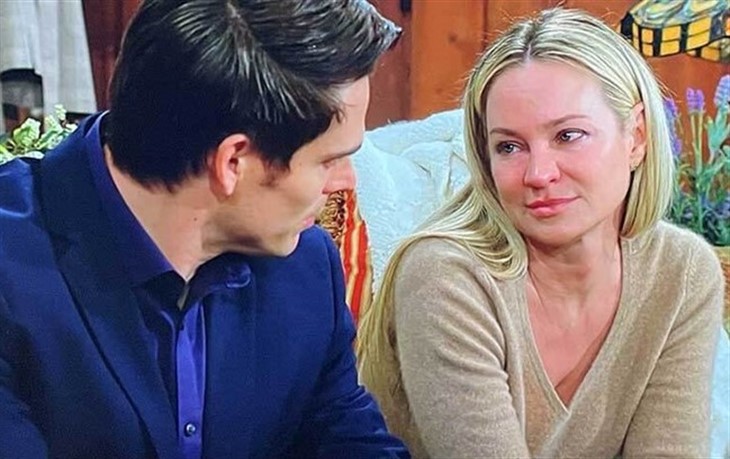 will eventually move on. Could Sharon have an encounter at Mariah Copeland’s (Camryn Grimes) wedding that leads to a shocking romance? Is it possible that her new love story has nothing to do with Nick Newman (Joshua Morrow) or Adam Newman (Mark Grossman)?

The Young And The Restless Spoilers – Mourning Rey Rosales

Y&R spoilers reveal that Sharon never expected to lose Rey Rosales (formerly played by Jordi Vilasuso) after only a year of marriage. Sharon has been going through the grieving process, and that will continue. However, Sharon will eventually find love again. With that being said, Sharon’s new man might not be with who fans expect.

Right now, it seems as if Sharon and Nick are going to get closer. Many viewers predict that Nick and Sharon will eventually rekindle their relationship. Although they are bonding and getting closer, it doesn’t mean anything will happen. Nick seems to be too obvious a choice, especially for a soap.

The Young And The Restless Spoilers – Not Interacting with Adam Newman

The Young and the Restless spoilers reveal that Sharon and Adam haven’t shared many scenes lately. Some believe it’s because Sharon and Adam might give into passion. While that is a possibility, what if Sharon doesn’t turn to a former flame. What if Sharon’s next love story is with someone brand new?

Soaps.com speculates that Sharon might not exactly have a fairy tale romance ahead. Sharon and Rey’s relationship over the past few months was stale and boring. So, it’s time to spice things up for Sharon. The soap could cause major controversy and conflict for Sharon with her next love. In fact, it just might be a love/hate relationship rather than a sweet romance.

Even though many viewers believe Sharon would never be able to forgive Ashland Locke (Robert Newman), let’s look at her history. Sharon is well-known to be attracted to bad boys and complicated relationships.

There is also the controversy and chaos that would unfold with the other characters. Imagine how everyone in Sharon’s orbit will react to her moving on with Ashland. Especially since it’s totally out of left field due to Ashland faking cancer and Sharon being a survivor. This might be wild speculation from Soaps.com but never say never in soaps.

What do you think of the speculation that Sharon and Ashland could develop a romance? Do you think it’s so crazy that it just might happen? Or are you convinced that Sharon’s next love story features Nick? Share your thoughts and remember to keep watching the CBS soap to see what happens next.