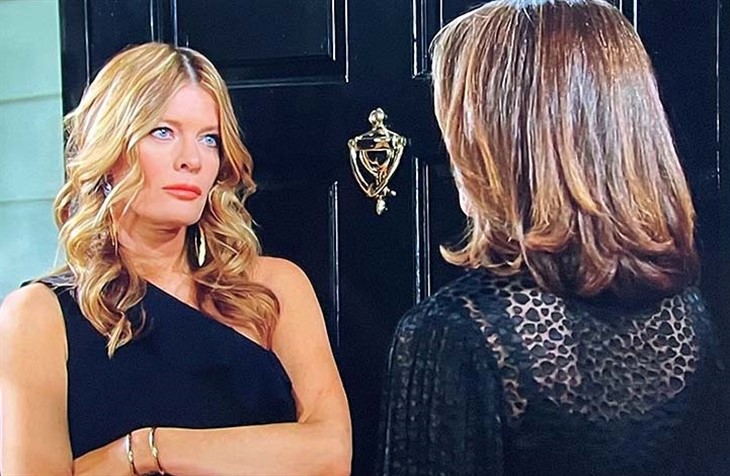 The Young and the Restless (Y&R) spoilers document that Phyllis Summers (Michelle Stafford) believes she has a plan that will sink Diane Jenkins (Susan Walters). Nikki Newman (Melody Thomas Scott) is on board but does not have to worry about the business Phyllis plans to disrupt.

Phyllis claims that she will not destabilize Jabot when attempting to sabotage Diane. However, that is pure conjecture, and Walters’ character is super savvy.

Nikki was falsely accused of murdering Diane many years ago. That claim was false because Diane has since revealed that she faked her murder with the help of Deacon Sharpe (Sean Kanan).

It was natural for Nikki to ally with Phyllis. Both ladies can not stand Diane for different reasons. Yet, they have been unable to stop or even slow her momentum since she announced her existence and flew in from Los Angeles, California.

Phyllis admitted to Nikki and Ashley that she allows herself to be set off whenever Diane is around. So, why would Stafford’s character believe that she can keep herself in check when working at Marchetti?

Fans must consider it preposterous for Summer Newman Abbott (Allison Lanier) to have considered her mother’s pitch to work at Marchetti as anything other than a way to harass or get Diane. Yet, current developments indicate that Phyllis will work for the new division of Jabot.

It is generally plausible to believe that Kyle Abbott (Michael Mealor) would go along with Summer’s presumed request on behalf of her mother. He recently asked Summer to endorse Diane’s hire, which she did.

Ashley’s concerns indicate that she will keep an eye on Diane, while also helping Phyllis to keep herself in check. It is reasonable to believe that Ashley’s desire to sink Diane and protection of Jabot’s interests will allow her to restrain Phyllis’ wild impulses from being foolishly implemented.

However, Diane’s impressive redemption efforts prove that she is exceedingly resourceful and resilient. Phyllis, Ashley, and Nikki are a strong group. But Diane can not be considered defeated until it happens on Y&R.