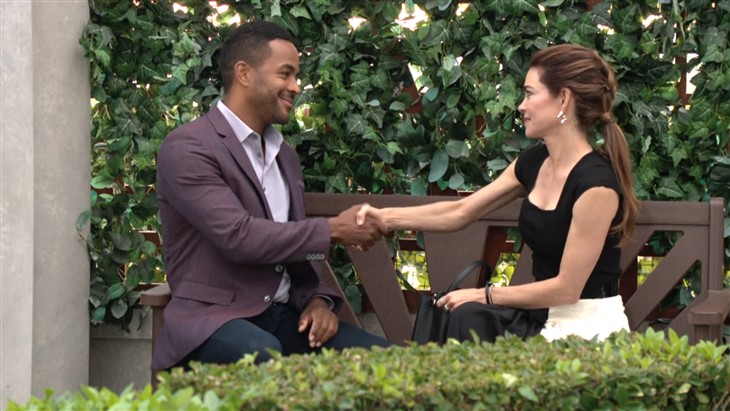 Elena expressed her disappointment in Nate for betraying his family. It led to Devon Hamilton (Bryton James) distancing himself from Nate. On the other hand, Victoria believes that Nate is just what Newman Media needs and hopes he will be a good CEO.

Nate and Victoria have palatable chemistry, which could put Elena on edge. She won’t know if she can trust him, especially considering their complicated history.

Elena told Nate that she was ready to forgive him and move forward to rebuild their relationship. The only thing standing in their way is Victoria. Y&R spoilers tease that Elena doesn’t trust Victoria and the rest of the Newman family, believing that with Nate’s questionable moral compass, they could influence him to betray those close to him.

On Tuesday’s (November 22) episode, Nate made plans for dinner with Elena. Instead, he stays at work late, chit-chatting with Victoria, without any concern for Elena’s time. It is something that irritates Elena and could be enough for the beautiful lady to reconsider spending her life with him.

Elena eventually gets fed up with Nate’s shenanigans and forces him to choose between work and her. She might say that she doesn’t trust Victoria as she knew he betrayed his family and walked away with nothing to work for Newman Media.

It certainly doesn’t help matters when Elena chats with Devon, who seems shocked that Elena reunited with Nate. It might get Elena thinking about her future and how Nate fits in her life long-term.

Y&R spoilers state that Elena heads home after Nate doesn’t show up for the night out. When she returns home, Nate is still not home. The writers are giving the viewers an inside look at the breakdown of Nate and Elena’s relationship. They have no chance of making it with Victoria’s meddling.

So far, we don’t know if Victoria and Nate will hook up, but her business demands are putting Nate in a tough spot. Elena has had enough, and it’s only a matter of time before she pulls the plug on their relationship.

Y&R fans, do you think Elena will leave Genoa City? This site is a leading source for everything linked to The Young and the Restless. Check back regularly for Y&R spoilers and news!

GH Spoilers: Curtis Shares His Concerns With Portia That Marshall May Not Be His Dad