Y&R Spoilers Monday, August 1: Phyllis Does Everything To Reach Jack 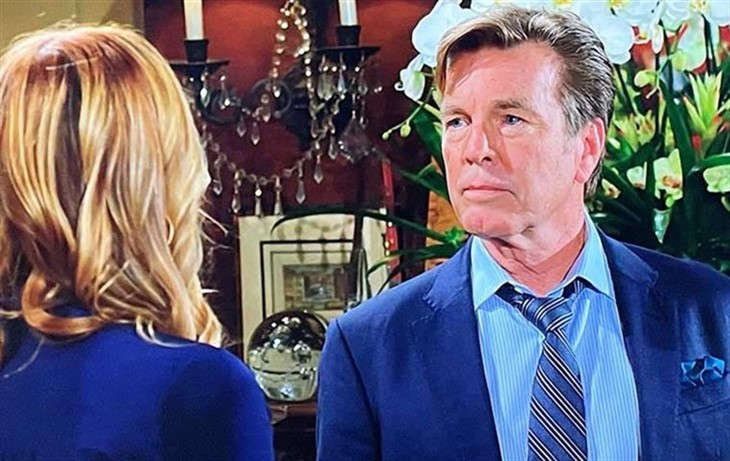 The Young and the Restless (Y&R) spoilers for Monday, August 1, 2022, reveal Nick facing quite a dilemma. Will he do the right thing or the Newman thing?

The Young And The Restless Spoilers – Phyllis Newman Is Relentless

Phyllis Summers (Michelle Stafford) is becoming more and more incredulous that Jack Abbott (Peter Bergman) cannot see what Diane Jenkins (Susan Walters) is up to and that she is just as dangerous and manipulative as she has ever been. Instead, all she can do is watch Jack become more and more friendly with her as if every bad thing she had ever done has been erased.

On Monday, she once again does everything she can to get Jack to see the truth. Even Summer Newman Abbott (Allison Lanier) believes everything Diane says and Phyllis knows something has to give. It’s one thing for Kyle Abbott (Michael Mealor) to want to trust his own mother, but Jack and Summer make no sense to her. When Diane lets Harrison know he can call her Grandma, Jack is not happy and Phyllis just wants to say “I told you so.” Will Jack finally see the truth now?

It’s almost time for Tessa Porter (Cait Fairbanks) to have her vocal surgery and she is terrified she will never sing again. But at least she has Mariah Copeland (Camryn Grimes) there to be as loving as a wife can be and remind her that singing should not define her. Will Tessa come out of this with her vocal cords intact or will she have to accept a different way of life?

If Brooke Lynn Quartermaine on General Hospital can live without her singing voice, then Tessa can learn to do so as well if necessary.

Perhaps Nate Hastings (Sean Dominic) should have remained a doctor because she doesn’t seem to be making business decisions that Devon Hamilton (Bryton James) can live with. All making Nate into a corporate executive did was make these two men fight almost daily.

On Monday, they clash again and Nate becomes angry when Devon tries to tell Nate what to do. That’s just not going to fly with Nate, who is still resentful over what Devon did to his hand. Stay tuned to The Young and the Restless weekdays to see how these stories play out.

Prince Harry To Honor His Love For Meghan In Upcoming Memoir