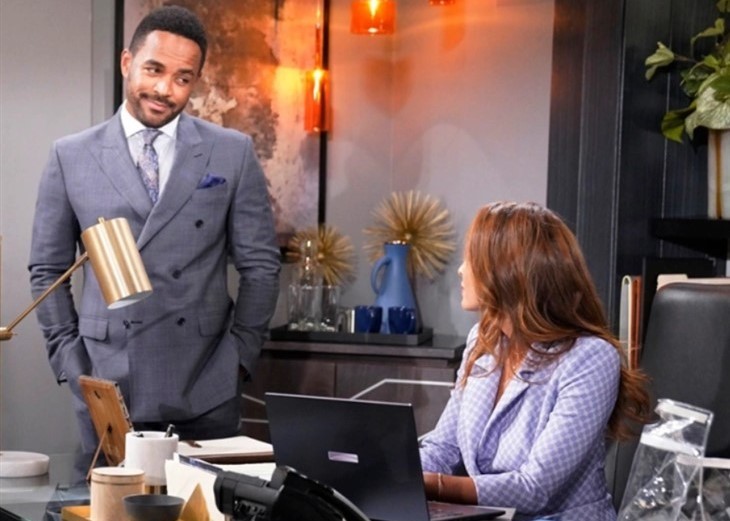 The Young and the Restless (Y&R) spoilers show that Nate Hastings (Sean Dominic) is planning a hostile takeover on Chancellor-Winters as a sort of revenge against his cousin, Devon Hamilton (Bryton James) for not accepting more of his ideas and plans and constantly belittling him.

It’s not only driven more of a wedge in their relationship, but Nate has someone constantly enabling him in Imani Benedict (Denise Boutte) and pushing him in the wrong direction. Nate has gone behind his family’s back to Victoria Newman (Amelia Heinle) to try to take over the company, and it could very well work!

Victoria is not innocent in any of this; she is fully aware of what she is doing. Victoria and Lily likely set the stage for their epic rivalry because they recently shared their girl power moment and congratulated one another. This will only intensify any resentment Lily has been trying to contain toward Billy and Victoria’s relationship because she has always had problems with it.

When Victoria is busy pulling off coups like this, Billy constantly feels the need to save her! Lily might believe that this shows Victoria needs to be brought down a notch rather than saved like some helpless damsel. She might be able to undo the harm even if Victoria takes the majority stake as she has in mind. Nate’s inside knowledge and additional legal weaknesses could allow Lily to significantly scuttle Victoria’s deal.

In the event that Lily messes up at Marchetti and decides she wants to run the hotel once more, she might even work with Phyllis Summers (Michelle Stafford). Lily may promise to sell The Grand Phoenix back to Phyllis if she aids her in regaining control of Chancellor-Winters and exacting revenge on Victoria.

Phyllis is an expert at hacking, creating false evidence, and generally acting dishonestly. Lily might be wise to use Phyllis as an ally because she will pretty much do anything if she benefits in some way. Whatever the case, Lily will explode when she learns of Victoria’s cunning move, and the war will then begin!

What do you think? Will Lily discover Nate’s plans and go after Victoria as a result? What will she think about Nate? Will Nate’s plan be successful or will Lily be able to thwart them off in time? Share your thoughts and remember to keep watching the CBS soap to see what happens next.