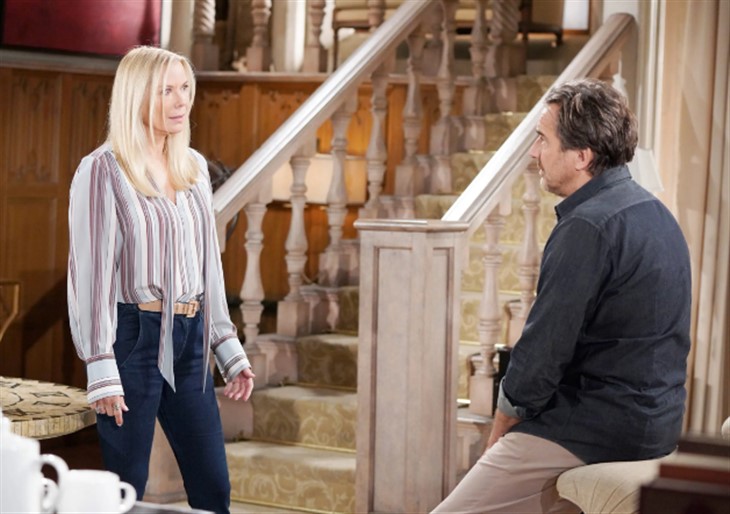 The Bold and the Beautiful (B&B) spoilers reveal that someone calls Child Protective Services to check on Douglas Forrester (Django Ferri). Ridge Forrester (Thorsten Kaye) confronts Brooke Logan Forrester (Katherine Kelly Lang). It wasn’t that long ago that Brooke suggested someone call CPS on Thomas Forrester (Matthew Atkinson). So, how will Ridge react to this situation?

The Bold And The Beautiful Spoilers – Thomas Forrester’s Threat

B&B spoilers reveal that in the Friday, September 23 episode, Thomas was slicing an apple with a knife. As Brooke and Thomas exchanged heated words, things got a bit intense. Toward the end of the conversation, Thomas’ actions implied a veiled threat.

Perhaps Brooke’s imagination is getting the best of her. However, it’s also possible that Thomas was intentionally trying to intimidate Brooke without using any words.

During the week of August 26, Brooke will fear for her life. It is also confirmed that Ridge and Thomas get an unexpected visitor from a CPS caseworker. According to Kaye’s interview with Soap Opera Digest, someone called CPS to check on Douglas’ welfare.

The Bold And The Beautiful Spoilers – Brooke Logan Forrester Confronted

The Bold and the Beautiful spoilers reveal that Brooke suggested that CPS be called on Thomas if there was any concern about Douglas’ safety. So, for CPS to show up after Thomas and Brooke’s confrontation, Ridge can’t help but wonder if his wife is responsible.

Ridge does contact Brooke to question her about CPS. Kaye told the publication,

“Once someone says something like that, you can’t get it out of your head. The last time he heard that, it was when he was with Brooke, so it is tough to think that she did not have anything to do with it. Ridge thinks that someone overstepped here because Hope [Logan Spencer, played by Annika Noelle] felt threatened, and that is a betrayal.”

The actor added that Ridge and Brooke try to talk out the situation. However, when Ridge directly asks Brooke if she called CPS, she says no.

Ridge loves Brooke and wants to believe she didn’t call CPS on Thomas. However, Ridge is also determined to protect his son. After all, Ridge recently admitted having so much guilt for not being the father to Thomas and Steffy Forrester Finnegan (Jacqueline MacInnes Wood) that he should have been.

So, could the CPS call make Ridge reconsider his destiny? Will Ridge do a complete 180 and be with Taylor Hayes (Krista Allen)? Does this CPS call mean the end of Ridge and Brooke’s marriage? Share your thoughts and remember to keep watching the CBS soap to see what happens next.