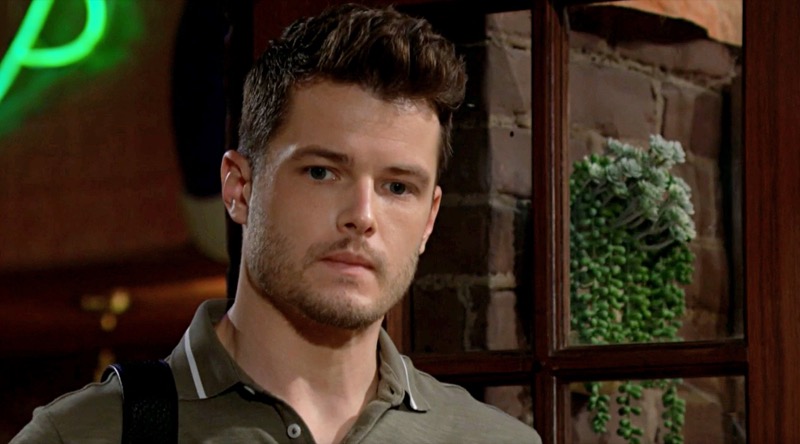 The Young and the Restless spoilers reveal that during the week of July 25, Kyle Abbott (Michael Mealor) will deliver bad news. Considering the signs point to Ashland Locke’s (Robert Newman) death, could the bad news be telling Harrison Locke (Kellen Enriquez) about his first father figure? How will Harrison react to learning Ashland is dead?

Y&R spoilers reveal that Ashland gets out of jail and beelines to Victoria Newman’s (Amelia Heinle) house. Even though Victoria is acting unconcerned about retaliation, chances are this is another one of her devious plans.

This is echoed by the teaser that Victor Newman (Eric Braeden) sets a trap for Ashland. This happens after Ashland’s arrest, so all of these seem to be connected.

After Ashland gets out of jail, he will go to Victoria’s house. Late at night, Victoria senses something or hears a noise. It prompts Victoria to go to the window and open the drapes and that is when she reacts to a horrifying sight. It is Ashland with his face pressed up to the glass glaring at her.

Victoria being ambushed by Ashland could be connected to Victor’s trap. However, it gets more complicated as Victor takes matters into his own hands during the week of July 25. Plus, Nick Newman (Joshua Morrow) shows up at Victoria’s house. However, will he get there before or after Ashland reportedly dies?

The Young and the Restless spoilers reveal that everyone in Genoa City hated Ashland. So, his death won’t be a huge loss to many people. However, there is one person that loved Ashland. That person is, of course, Harrison. So, when Kyle delivers bad news during the week of July 25, it’s probably telling Harrison after Ashland’s death.

The Young and the Restless Spoilers: Harrison Locke’s Rage

Right now, Harrison is a sweet little boy. However, death can really change a person, including a child. Harrison might know that he was prevented from seeing Ashland. At the time, Summer Newman-Abbott (Allison Lanier) tried to shield Harrison from seeing Ashland get arrested.

However, could Harrison blame Kyle and Summer for banning him from Ashland’s life? Now Harrison will never get the chance to see Ashland again. Even though Harrison is young and innocent, he could have an unexpected reaction to Ashland being gone forever.

Do you think Kyle’s bad news is telling Harrison about Ashland’s death? How will Harrison react when he learns of the news? Will Harrison blame Kyle and Summer for banning Ashland from his life? Share your thoughts and remember to keep watching the CBS soap to see what happens next.