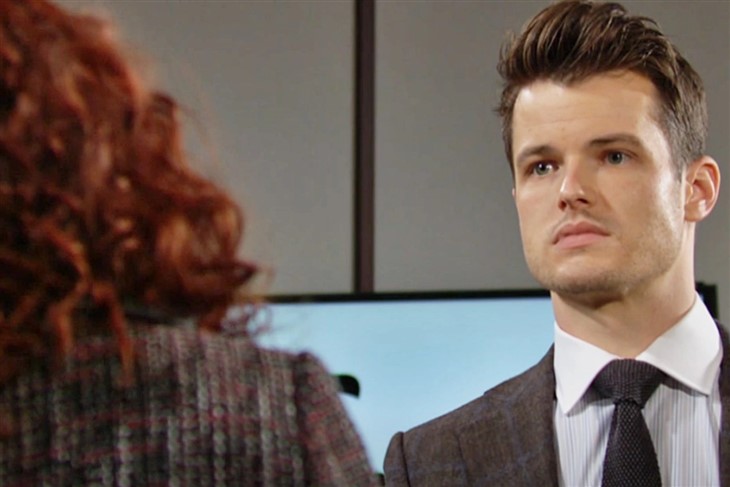 The Young and the Restless spoilers reveal that Kyle Abbott (Michael Mealor) will go back and forth on Diane Jenkins (Susan Walters). Kyle and Summer Newman-Abbott (Allison Lanier) will also go through troubled waters as a couple. It’s possible that Kyle could form an unexpected new dynamic with Sally Spectra (Courtney Hope). Keep reading to find out the details.

The Young And The Restless Spoilers – Kyle Abbott’s Turmoil

Y&R spoilers reveal that Kyle initially told Diane that he needed time to think about her request for forgiveness. Diane also wanted another chance at having a relationship with her son. After taking some time to think and talk with others, Kyle went to Diane’s hotel room. Kyle ended up telling Diane that he would leave the door open for a possible relationship in the future.

However, Kyle will change his mind shortly after that conversation. The weekly preview shows Kyle and Jack Abbott (Peter Bergman) have Diane arrested for abandonment. Fans can expect Kyle to continue going back and forth when it comes to Diane.

It is teased that Kyle and Summer could go through a rough patch during May sweeps. One factor is Diane and how far Phyllis Summers (Michelle Stafford) will go to get rid of her enemy.

Phyllis will try to convince Kyle and Summer why they need to stay far away from Diane. This will put Summer right in the middle of Phyllis and Kyle. The two could have very different perspectives on Diane’s redemption story and agenda.

The Young And The Restless Spoilers – Diane Jenkins Finds Allies

The Young and the Restless spoilers reveal that Diane could find some allies in Genoa City. Of course, Diane has already made progress with Allie Nguyen (Kelsey Wang). Even though Diane used Allie to get to Jack, the graduate student seems to have warmed up to Diane. It is teased that Diane and Allie will continue to bond when they reunite in Genoa City.

It is also suggested that Diane and Sally could end up connecting. Sally knows exactly what it feels like to be the insider that never fits in. Sally has done a lot of bad things that people will never forgive her for. So, she might understand Diane’s goal.

If Diane and Sally end up connecting, that could lead to other dynamics. Kyle and Sally don’t exactly get along. However, Kyle will be looking for someone to understand why he feels torn about Diane. Sally might be one of the few people willing to hear both sides of Kyle’s thoughts.

Everyone else in Genoa City keeps telling Kyle not to give Diane another chance. However, that is still his mother and it’s only natural that he feels drawn to her. So, this could lead Kyle and Sally to form an interesting new dynamic.

However, this might cause some issues with both Summer and Adam Newman (Mark Grossman). So, we will have to see what happens with this storyline.