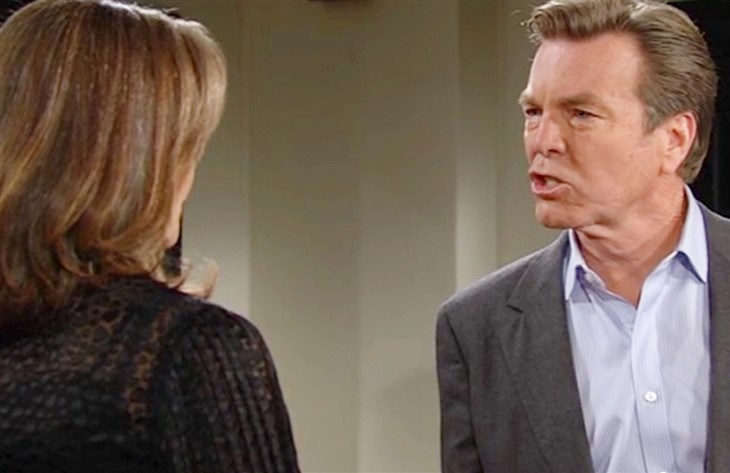 The Young and the Restless (Y&R) spoilers for Monday, April 11, 2022, reveal Jack preparing to return to Genoa City with a surprise.

The Young And The Restless Spoilers – Diane Jenkins Had Better Behave

Jack Abbott (Peter Bergman) knows that there is no turning back now. Diane Jenkins (Susan Walters) is alive and well and the rest of Genoa City better find out this news from him and not someone else. After all, it’s not every day that someone comes back from the dead. Well, at least not in real life. This is a soap opera and it’s commonplace but that doesn’t mean that people won’t be shocked. After all, there was a body and it certainly seemed to be a dead one.

It looks like Jack also knows that bringing Diane home with him will cause more problems than it is worth, so he sets some boundaries with Diane. She needs to leave his family alone — and Phyllis Summers (Michelle Stafford), too. But we all know Diane has never, ever been ruled by boundaries.

Y&R Spoilers – Something New For Teriah

Tessa Porter (Cait Fairbanks) and Mariah Copeland (Camryn Grimes) have not had too many troubles of late. In fact, their life seems downright idyllic now that all they do is prepare for their wedding and to adopt a baby. And on Monday, the pair make a big decision.

Is it about the adoption or the wedding? Or maybe even their living arrangements. After all, they live in a dumpy one-room apartment and make pretty good money now, so maybe they should consider buying a house to keep this baby in.

The Young And The Restless Spoilers – Rey Rosales Has A Dilemma

Rey Rosales (Jordi Vilasuso) has also had a relatively calm life of late, but spoilers say that his loyalty will be tested on Monday. Is this loyalty to his wife, Sharon Rosales (Sharon Case), or his new friend, Chelsea Lawson (Melissa Claire Egan)?

Either way, it might be best that he makes the right decision here. But will this decision take him out of town for good? After all, Jordi Vilasuso is leaving the soap, so might this be the beginning of the end for Rey? Stay tuned to The Young and the Restless weekdays to see how these stories play out.

Days Of Our Lives (DOOL) Spoilers: Xander Gives Up On Sarah