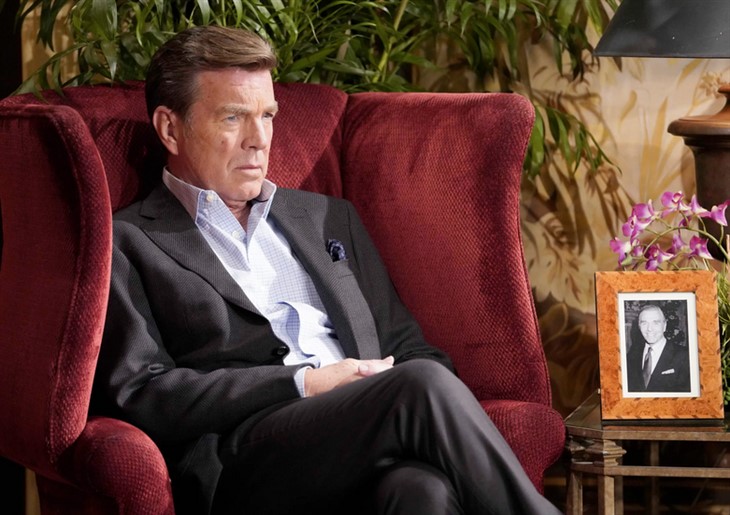 The Young and the Restless (Y&R) spoilers document that Jack Abbott (Peter Bergman) appears ready to fight. After choosing to avoid a confrontation with Victor Newman (Eric Braeden) for a handful of years, Adam Newman’s (Mark Grossman) free agent status is too enticing.

One of Y&R’s legendary arcs involved Victor and Jack’s decades-long battles. Family, women they loved, and business were part of their shared lore.

Offering Adam a job at Jabot, where he would take over for Kyle Abbott (Michael Mealor) as co-Chief Executive Officer, is a shot across the soapy bow.

The Young And The Restless Spoilers – Sordid Past Revisited Again

Adam became a flashpoint between this show’s two leading men years ago. Jack and Victor’s youngest son created a fake diary as part of an attempt to frame the Moustache for murder.

Devoted fans know that Bergman and Braeden’s characters were the focal point of many storylines for years. Their clashes involved cross-family ties, with business dealings often part of the background.

Of course, the arguably most infamous move Jack ever made against Victor was stepping over his body in the Collonade Room. Victor had a heart attack, and Jack left the otherwise empty room, with Braeden ad-libbing a brush past Braeden’s body.

It felt too easy. Summer Newman Abbott (Allison Lanier) suggested that Marchetti was ripe for purchase. Kyle agreed and asked his dad if Jabot could acquire the Italian fashion house.

Jabot was out of fashion for years. Yet, Jack made the deal happen in what seemed like days. Kyle became the head of Marchetti weeks later, with the audience knowing most deals of that financial magnitude do not happen nearly as quickly.

But the above was necessary for various plot pieces to fall into place, including Jack’s subsequent offer to Adam. He wants to fill the vacuum by re-teaming with Adam, realizing that Victor will surely respond.

Jack’s life has been rather mild since he sequestered himself from fighting with Victor. It appears Smilin’ Jack wants back in the game. Who better than Victor’s self-appointed genetic nemesis to aid Jack’s renewed zeal on Y&R?

Victor is under siege due to the Ashland Locke (Robert Newman) death cover-up. That implies Jack and Adam will attack while he is vulnerable.