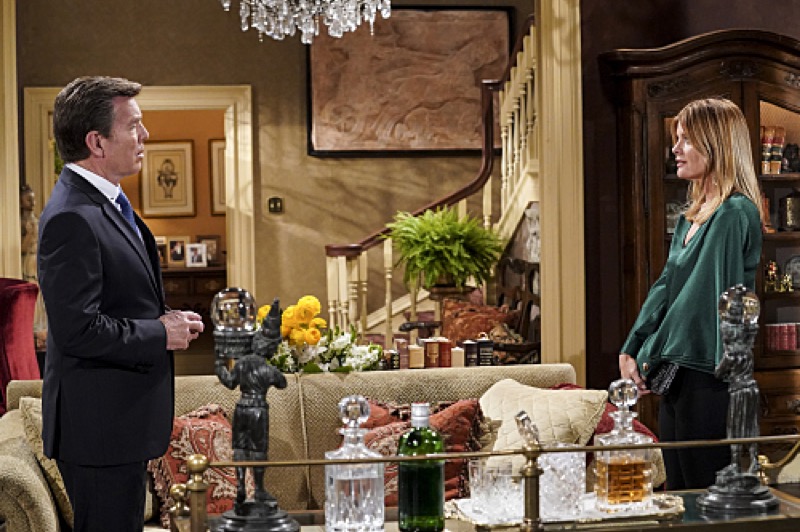 The Young and the Restless spoilers document that Phyllis Summers (Michelle Stafford) had all she could take. Then, after once again being blindsided, she told Jack Abbott (Peter Bergman) what he needed to hear. Phyllis may be gone if he waits too long to reconcile with her.

The truth is something Jack wants to avoid. He refuses to admit that Diane Jenkins’ (Susan Walters) return to life and Genoa City, Wisconsin, in particular, has him off-balance.

Jack’s reaction to Diane’s return generally mimics Phyllis’. They both were more than shocked by her undead reveal. The multiple-time couple was transported back to story lines that played out years ago on Y&R, with all the emotional gunk thrown resurrected.

Diane never thought Phyllis was right for Jack. Of course, she is biased because Stafford’s character married Jack twice, while Diane never did.

However, The Young and the Restless spoilers show Kyle Abbott (Michael Mealor) is seen as the ace. Diane has used Jack’s youngest and now, only surviving son, as a weapon to lord over Phyllis. As anticipated, Phyllis can become her own worst enemy, which has alienated Jack once more.

Jack’s charged chat with Phyllis at Chancellor Park came after he saw Diane getting into it with her once again. That is when Phyllis finally felt compelled to tell him what the future will be like if he does not wake up.

Only the most ardent anti-Phyllis fans would claim she is being ridiculous. Jack is not anti-Phyllis. His rude comments about the persistence of her perceived character flaws reflects the betrayal he felt when she admitted to cavorting with him as inspired by Diane’s return and as a message to her.

An unexpected problem resulted when Phyllis shared the details of that event with her daughter. Summer Newman Abbott’s (Allison Lanier) long-standing protection of Jack resulted in her chiding Phyllis’ behavior.

Phyllis took Summer’s comments as also meaning she is on Diane’s team, which Lanier’s character is not. But, as Jack noted, Phyllis can not avoid needing people to pick sides.

Young And The Restless Spoilers – Jack Abbott Must Be Careful

Jack cautiously but optimistically entered another romantic path with Phyllis. His hopes were quickly dashed by what took place. However, Stafford’s character is right to point out that he is not seeing the issue clearly.

One is never able to be objective about one self. So, no one, including Phyllis, should expect Jack to achieve a neutral stance, to dismiss the distant past or what just happened on Y&R.

Yet, Jack must be careful not to allow himself to be lulled to sleep by Diane. She has pulled off the remarkable with her return from the dead. Believing that Jack could come to trust her and then fall in love is not out of the question, as Phyllis’ fears.