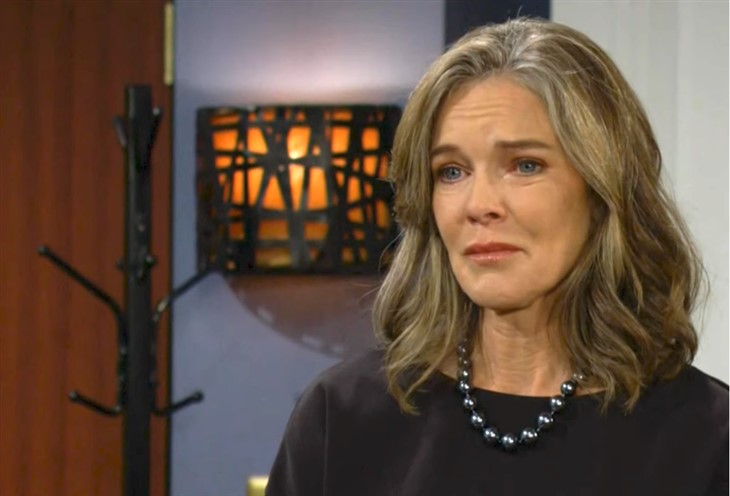 The Young and the Restless (Y&R) spoilers tease that Diane Jenkins’s (Susan Walters) past is about to haunt her and everyone else in her life. Ashley Abbott (Eileen Davidson), Nikki Newman (Melody Thomas Scott), and Phyllis Summers (Michelle Stafford) have been working tirelessly trying to find out what she’s hiding and running her out of town.

So far, they have come up empty. Every time they figure out something about Diane’s past, she explains it to Jack Abbott (Peter Bergman) with a sob story, making Jack and Kyle Abbott (Michael Mealor) feel sorry for her.

When Diane feels backed into a corner by the trio, she often runs to Jack sharing a sad story as to why her life is in danger. Jack seems to believe her stories, which frustrates Ashley, Nikki, and Phyllis. They cannot believe someone as smart as he falls for Diane’s lies.

Diane’s new angle is Jeremy Stark (James Hyde) is after revenge, and he will come looking for her. She tearfully told Jack that this affected her and would also crush Kyle and Jack. She added that Jeremy could hurt them to get back at her.

Instead of Jack advising Diane to leave town, he swore he would protect her for Kyle’s sake. Then, The Young and the Restless spoilers revealed Jack attacked Ashley for “picking on” Diane and demanded she back off and leave poor Diane alone. As you can imagine, it didn’t sit well with Ashley.

So far, we don’t know much about Jeremy. We know he conned Diane into breaking the law and becoming a cash mule so he could move money. However, her story could be untrue, and she could be why he’s in prison.

The one person that likely knows Diane’s real story is Tucker McCall. So far, Tucker has remained tight-lipped about Diane’s time in Los Angeles.

James Hyde, the actor who will play Jeremy, revealed that his Y&R arc would begin in December. That means his time is quickly approaching, and finally, the Y&R fans will know how much of Diane’s story is true.

The Young and the Restless spoilers state that Diane will make Thanksgiving dinner uncomfortable as she lays it on thick. She will tell the family how much she appreciates the support from Kyle and Jack, probably crying that without them, she wouldn’t know what she would do. We should probably expect Ashley to come unglued and have a stronger need to expose Diane and run her out of Genoa City for good.

Y&R fans, do you think Diane is lying about Jeremy Stark? This site is a leading source for everything linked to The Young and the Restless. Check back regularly for Y&R spoilers and news!