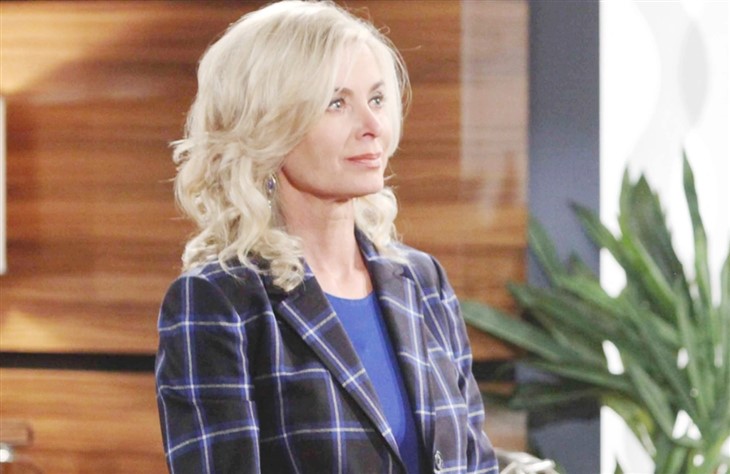 The Young and the Restless spoilers show that while Ashley Abbott (Eileen Davidson) is being played by Tucker McCall (Trevor St. John) for information concerning Diane Jenkins (Susan Walters), her brother, Jack Abbott (Peter Bergman) may have finally made her realize that she is making a mistake.

While it felt like Ashley was the one who was going to ‘play’ Tucker for information about Diane, she has in turn basically fallen back in love with him and he is walking all over her. It took Jack to say something before she had a brief moment where she realized that he may be right.

The Young And The Restless – Ashley Abbott’s (Eileen Davidson) Mistake

Ashley made the biggest mistake she could make, “do not fall for Tucker again”. She’s been so busy trying to get back at Diane the entire time, she ended up being the one that got played, and now that Jack has made her aware of this, we wonder if she is going to take it back to Tucker, or if she will back off altogether.

The Young and the Restless spoilers indicate Tucker seems like her kryptonite though, so it may be difficult for her to stay away from him, no matter how much damage he may be doing. With Diane telling the truth to Jack, he has come out in full defense of her, causing Ashley to take a step back and analyze the situation.

We haven’t been entirely sure what was going to happen with Jack and Diane, but now it appears that he has no trouble defending her, even to his own family. She has made good on her deal to mend her relationship with Kyle Abbott (Michael Mealor) and coming clean to Jack was a big step as well.

With Jack defending her this much, we can’t help but wonder if there is still a chance that these two will get back together in a more romantic sense. Diane has come a long way, and honestly, we’ve become a bit of a fan. She continues to make everyone realize that she has grown into a different person while they are still stuck in their old ways. Jack and Diane deserve a second chance, and I think we are on the verge of seeing it.

What do you think? Are you a fan of Jack and Diane and do they deserve a second chance together? Share your thoughts and remember to keep watching the CBS soap to see what happens next.