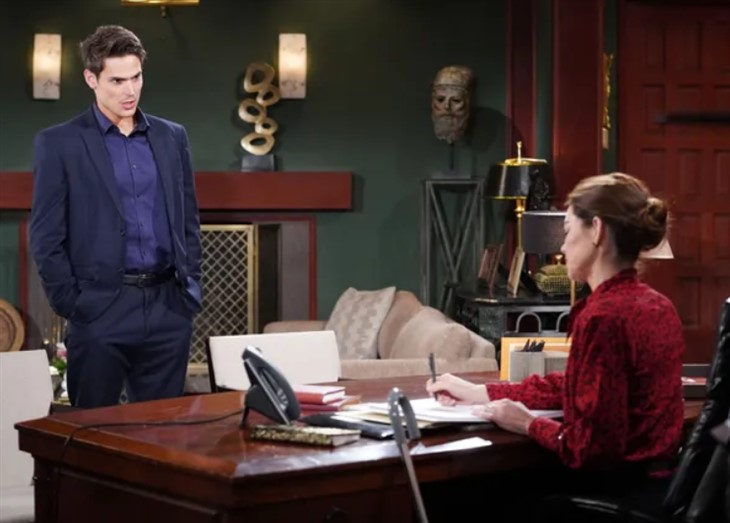 The Young and the Restless (Y&R) spoilers reveal that Victor Newman (Eric Braeden) suggested Victoria Newman (Amelia Heinle) take time off. However, Victoria was not going to do it if Adam Newman (Mark Grossman) would take over. Victoria kills two birds with one stone. Heinle explained if Victoria is trying to demoralize Adam or if she’s really thinking about the company.

The Young And The Restless Spoilers -Victor Newman’s Insistence

Y&R spoilers reveal that Victor continues to worry about Victoria. Victor knows that his daughter has been through a lot. The patriarch thinks it’s best if Victoria took some time to take care of herself and regroup.

However, Victoria knows that means Adam will be put in charge temporarily. Victoria wants to be sure that doesn’t happen. Since Victor won’t stop trying to convince Victoria to take a step back, she comes up with a solution.

Instead of Adam being co-CEO, Victoria promoted Nikki Newman (Melody Thomas Scott). Victoria trusts her mother and feels that it’s the best decision. Victor heard what Victoria had to say and fully supports Nikki’s new role. However, Adam isn’t thrilled to find out that he’s been pushed out of the position he wanted.

The Young And The Restless Spoilers- Adam Newman’s Revenge

The Young and the Restless spoilers reveal that Adam told Sally Spectra (Courtney Hope) about Victoria promoting Nikki. Sally understood how defeated Adam felt. Sally suggested that Adam strike out on his own.

However, he reaches a different decision during the week of May 9. With fury in his eyes and a clenched jaw, Adam tells Sally that he wants Newman Enterprises… every last bit of it.

Soap Opera Digest asked Heinle if Victoria’s goal is to completely demoralize Adam. Even though it might appear that way, the actress explains that’s only part of it. The bigger reason is that Victoria needs to trust whoever is her co-CEO. Victoria doesn’t trust Adam, so of course, she doesn’t want him running the company.

“Maybe, on some level [intending to demoralize Adam], but she truly believes that he can’t be trusted and she needs to have complete faith in her right-hand person.”

What do you think of Victoria promoting Nikki? Do you believe Victoria made the right decision or should she have given Adam a chance? What do you think Adam plans to do in order to get Newman Enterprises? How far will Sally go to help Adam accomplish that goal? Share your thoughts and remember to keep watching the CBS soap to see what happens next.