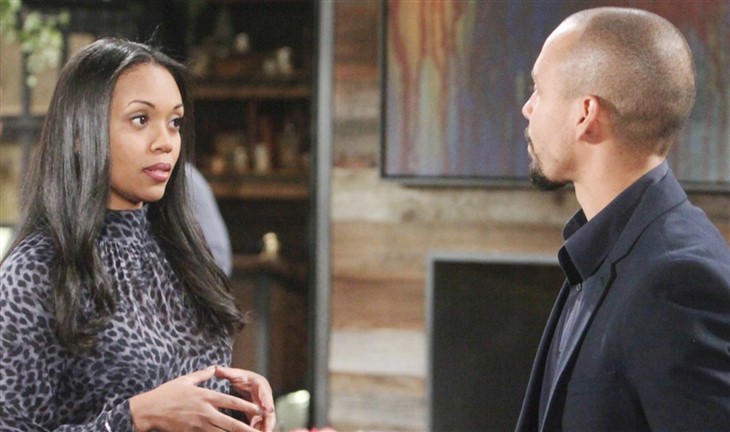 The Young and the Restless spoilers reveal that the custody battle over Dominic Newman-Abbott-Chancellor (Rainn and River Ware) could have an interesting end. If Devon Hamilton (Bryton James) has a child of his own, will that fill the void he feels? It certainly is possible, especially since Devon and Amanda Sinclair (Mishael Morgan) continue to get closer.

The Young And The Restless Spoilers – Devon Hamilton’s Void

Y&R spoilers reveal that Devon always had a connection with Dominic. After all, he helped create the child and helped Mariah Copeland (Camryn Grimes) give birth. However, Dominic isn’t Devon’s child. The little boy belongs to Chance Chancellor (Conner Floyd) and Abby Newman-Abbott-Chancellor (Melissa Ordway).

Devon’s attachment intensified when he cared for Dominic while Abby searched for Chance. However, that doesn’t change the fact that Dominic belongs to “Chabby,” not Devon.

Devon decided to deal with the void from Dominic going back home by asking for more time with Dominic. However, he didn’t just want more visitations. Devon asked for regularly scheduled unsupervised visits and overnight stays. Devon added that he could give Dominic his own room at his place and wanted the change put in the legal agreement.

Chance and Abby discussed it, but the decision was already made the minute Devon opened his mouth. While Chance and Abby agreed that Devon was asking for too much, they didn’t agree on how to tell him. Chance wanted to be sensitive and respectful to Dominic’s feelings. As for Abby, she lashed out as she felt as if Devon was trying to take Dominic away from her.

The Young And The Restless Spoilers – Amanda Sinclair Pregnant?

The Young and the Restless spoilers reveal that the custody war eventually will end. The legal agreement clearly states that Devon was just the donor and has no legal rights to the child. Although a lot has happened, the contract was signed by everyone… including Devon. With that being said, how can this story end with a happy ending for everyone?

One possibility is that Devon could end up with a child of his own. Devon and Amanda are living together now. They are getting closer and Amanda seems to really understand Devon. She can read him like a book, even when he covers up his real feelings about an issue. Meanwhile, Devon is sensitive to Amanda’s need for privacy and distance sometimes. He understands why she’s that way and that she has her own way of dealing with things. So, the next step could be parenthood.

Amanda has mentioned more than once that she loved seeing Devon with Dominic. She got to see firsthand what a great father he would be. That is really important to Amanda considering she had to grow up without hers. Then, she found out how her grandfather raised his children. If Amanda ends up pregnant, the baby could fill the void Devon feels and end the custody war.