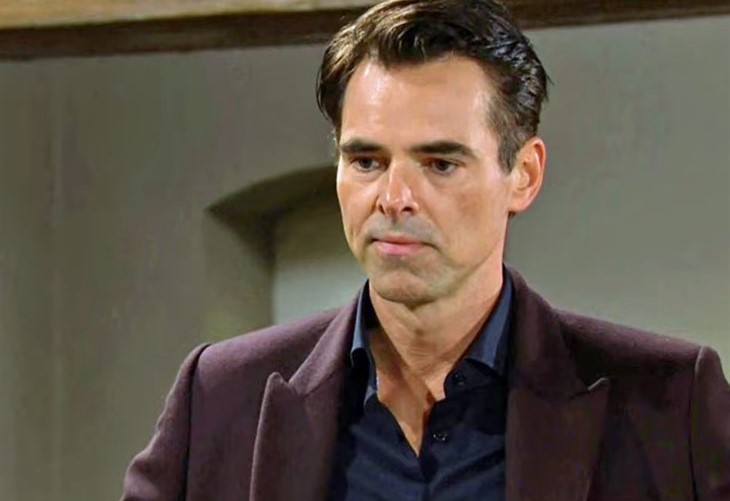 The Young and the Restless spoilers tease Billy Abbott (Jason Thompson) hasn’t exactly moved on.  It’s clear that Billy Boy still loves Victoria Newman (Amelia Heinle) to Y&R fans, & it’s about to be clear to those that listen to his podcast. Does anyone in Genoa City listen to Billy’s podcast?

1. He is still in love with Victoria
2. His podcast is BORING.

Ergo, Y&R fans are left to wonder if they are the only ones actually listening to Billy Boy’s podcast.

The Young And The Restless – Billy Abbott’s Podcast

It’s been revealed during Billy’s podcast that Hamilton-Winters & Chancellor Industries are in the preliminary stages of merging. No one in Genoa City has reacted. Not Victoria. Not Abby Newman-Abbott-Chancellor. Victor Newman (Eric Braeden) hasn’t even reacted.

It seems that none of these aforementioned Genoa City elites have tuned in to listen to Billy’s podcast, nor anyone that knows them.

However, according to Billy’s current lover & boss, there have been people tuning in. It’s not clear where Lily is getting her stats. It’s also not clear the last time Billy has done anything to do with anything related to his COO position at Chancellor Industries. Billy’s live-in lover/boss (the CEO of Chancellor Industries) doesn’t seem to know either.

It’s SO obvious… Billy is still in love with Victoria. Well, to most but not so much his current lover.

If Lily hasn’t caught on to Billy still being in love with Victoria, she should be up to speed now. Billy was recently recording a rough draft on their living room couch while Lily was resting upstairs. When Lily went downstairs after resting, she found Billy obviously talking about Victoria without saying he was talking about Victoria.

It seems Lily has at least caught on a bit as she admitted to Billy she could tell he was talking about Victoria. She hasn’t mentioned to him, however, that she hasn’t observed him doing anything for Chancellor Industries since just after taking on the COO role.

Now Billy Boy has invested in a voice changer so his voice can’t be recognized. Perhaps he can fool those who might tune into what he has to say beyond Genoa City. However, if anyone stumbles upon this podcast that knows Billy or knows anyone that knows Billy, they will be in the loop.

We’re sure Billy is in love with Victoria, but whether Ashland Locke (Robert Newman) is in love with her is still up for debate. Regardless, it seems Victoria & Ashland ending their marriage is imminent. After all, Ashland just made a deal including that he both leave Newman-Locke & annul his farce of a marriage to Victoria. Victor Newman hit the button and 500 million dollars as been sent to Ashland Locke.

The Young And The Restless Spoilers: Victoria’s Burning Car, Saved By The Enemy?https://t.co/sEd3zCdLxa#YR #TheYoungandtheRestless

Billy was onto Ashland from the beginning. He did whatever he could do in his power to prevent Victoria & Ashland from getting married. Victor did whatever he could in his power to make sure The Wedding of the Century went off without a hitch. Billy ended up losing Chancellor Communications and wound up faking a meltdown in an attempt to get back at Victor. Getting back at Victor failed along with preventing Victoria from Marrying Ashland.

As of late, Victoria has confided in Billy sharing the latest of Ashland’s ongoing lies & Victor has been laser-focused on eliminating Ashland Locke from his company & his oldest daughter’s life.

When Victoria and Ashland finally separate, will Billy fill the void? If so, will Victor treat Billy Boy any differently than he has in the past? No one can argue that Billy is an angel & never caused Victoria any trouble, but his shortcomings have far been surpassed by that of Bobby DeFranco…

Keep checking Soap Opera Spy for more the Young and the Restless spoilers, news, and updates.  And, don’t forget to share your thoughts in the comments below!