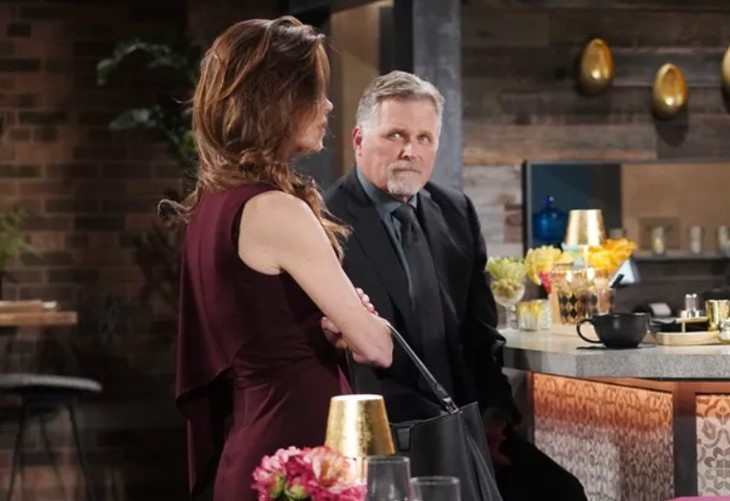 The Young and the Restless spoilers for the week of March 21 reveal that Ashland Locke (Robert Newman) will realize he’s not going to win. It is confirmed that Ashland comes up with an escape plot. Could Ashland try to murder a Genoa City resident and take over their identity somewhere new, just as he did when Bobby DeFranco turned into “Ashland Locke?”

The Young And The Restless Spoilers – Newman Family Bands Together

Y&R spoilers reveal that Victor Newman (Eric Braeden) is desperately trying to save Victoria Newman-Locke (Amelia Heinle). At the same time, Victor wants to protect his legacy. To defeat a man like Ashland, Victor knows that the entire family needs to band together.

Nick Newman (Joshua Morrow) was able to talk to Victoria, who admitted she was beginning to have doubts about Ashland. However, Ashland managed to interrupt the meeting. Victoria is at a crossroads right now.

However, she won’t be able to deny the truth forever. When that happens, the Newman family should band together. The only wild card is Adam Newman (Mark Grossman), who could let sibling rivalry get in the way.

During the week of March 21, it is teased that the walls will begin to close in on Ashland. Right now he is putting up a fight and has no intention of going anywhere. That will change next week and Ashland realizes he needs to leave town immediately. However, Ashland might be facing serious criminal charges, which means he will need to take another identity just as he did 40 years ago.

Fans may recall Ashland isn’t the villain’s real name. It is Bobby DeFranco and Ashland took his alleged friend’s identity. Ashland claims it was a tragic accident but there are signs that something more sinister happened. Ashland likely murdered this person and stole their identity. So, Ashland might feel the need to do it again.

The Young And The Restless Spoilers – Lily Winters’ Bombshell

The Young and the Restless spoilers reveal that during the week of March 21, Lily Winters (Christel Khalil) will share shocking information with Nate Hastings (Sean Dominic). The truth about Ashland not having cancer is already known.

So, the only bombshell Lily might have is Ashland hacking into ChancComm’s email and publishing his own exposé. While everyone has read the article, Nate might be unaware that Ashland was behind the entire thing with the plan to sue Lily and Billy Abbott (Jason Thompson). Nate might also not know the whole shenanigan with Jesse Gaines (Jamison Jones).

As everything comes to light, Ashland will get ready to put his escape plan into motion. With Ashland’s murder and identity theft plot, everyone is at risk. Perhaps Ashland will even be as bold as to think he can transform into Victor or even Nate. If this is his plan, then it will be foiled. The question is how will Ashland be stopped before he takes another life?

DOOL Spoilers: Has Craig Turned The Tables On Leo?