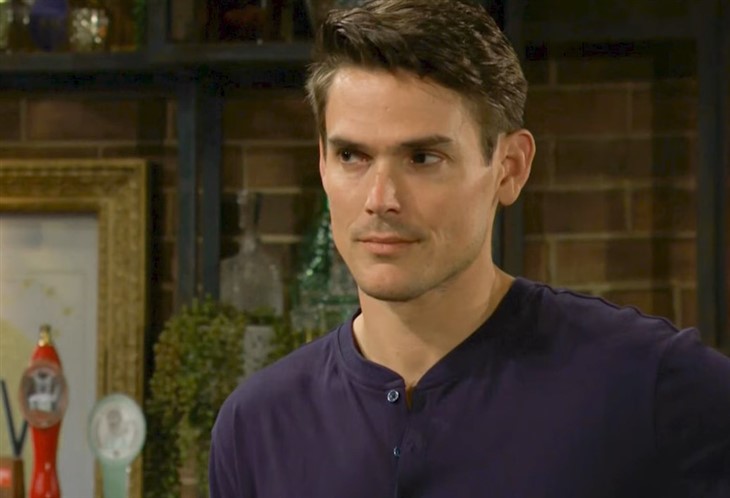 The Young and the Restless (Y&R) spoilers document that Adam Newman (Mark Grossman) is relieved that Chelsea Lawson (Melissa Claire Egan) is okay. He knows that Billy Abbott (Jason Thompson) played a vital role in helping her avoid what could have been a life-altering outcome for Connor Newman (Judah Mackey).

Billy’s awareness, insight, and concern led him to the Grand Phoenix Hotel rooftop. He knew something was wrong when Chelsea left the Glam Club and recalled that their getaway spot was a likely spot where she was headed.

Adam is genuinely concerned with Chelsea’s health. But he is also territorial, believing it is not healthy for Billy to remain connected to Chelsea.

The Young And The Restless Spoilers – Delia Abbott Never Goes Away

Billy has and will never get over the death of his daughter. He holds Adam accountable because the character, who was then played by Michael Muhney (Adam), did not initially realize that he hit Delia and then could not bring himself to admit what he thought happened.

Adam’s decision was based on Connor’s need for corneal transplants, which Billy and Chloe Mitchell (Elizabeth Hendrickson) selflessly provided as a gift of life. So, Billy and Chloe’s contempt for Adam is completely justified.

Y&R Spoilers – Adam Newman Does Not Know He Is Guilty

Hardcore viewers know that the Delia Dies storyline is actually an open question. Adam never confirmed that he hit Delia, only believing he did because he found remnants of her Halloween costume under the wheel well of his fabled black sports utility vehicle.

Another car’s headlights were shown on the same highway on the outskirts of Genoa City, Wisconsin. It has always felt purposeful that a more serious investigation was never conclusively conducted regarding the events of that night.

But the authorities did not need to rule Adam guilty since he decided his SUV must have been what hit and killed Delia that fateful night.

Billy and Chloe have always known, not just believed, that Adam was poison for Chelsea. While he is not seen as the reason why she currently needs mental health treatment, they know that he would be a destabilizer if she allowed him to reconnect with her.

Adam is not single by choice. Sally Spectra (Courtney Hope) dropped him in favor of his brother. While she retains feelings for Adam, Sally is falling in love with Nick Newman (Joshua Morrow).

Thompson’s character will not allow Adam, of all people, to shut him out of Chelsea’s recovery efforts on Y&R.

GH Spoilers: Portia Plows Ahead With Plans For A Wedding Absent The Truth

Days Of Our Lives Spoilers: Alex And Stephanie’s Passions Explode, They Hit The Sheets