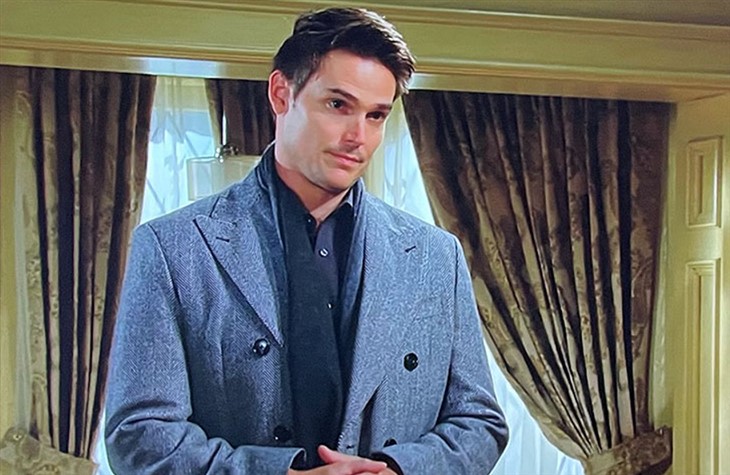 The Young and the Restless spoilers document that Adam Newman’s (Mark Grossman) unexpected request complicates matters as the near year arrives in Genoa City, Wisconsin. While he knew that Chelsea Lawson (Melissa Claire Egan) was willing to give their relationship another try in the recent past, Adam did not know that her love for him lingers.

Chelsea has been pushed by Sally Spectra’s (Courtney Hope) ultra-competitive personality to conclude. Adam is the man that still moves Chelsea like no other. Fans see that he is still impacted by her presence when they are together, especially when this former couple is alone.

Chloe Mitchell (Elizabeth Hendrickson) was disturbed by her best friend’s questions and comments about the man who has long been a nemesis to both ladies. Hendrickson’s ever-resilient character also accurately labeled what the three sharp-pointed combinations of Chelsea, Adam, and Sally represents.

The Young And The Restless Spoilers – Flying Into The Infamous Triangle

A lot more than legend details that many individuals were lost when entering the Bermuda triangle. The area of the Atlantic Ocean between Bermuda, Florida, and Puerto Rico has numerous documented cases of aircraft disappearing within that region due to forces that have often been unexplainable.

So too is Adam’s power to suck women into his vortex. Chloe incredible became another individual to be drawn to Adam’s darkness, albeit not in a romantic way when accepting his offer to join Newman Media.

Adam is attempting to pursue a redemption arc, which Chelsea recognizes as real, that Sally supports, and where Chloe remains positioned as a skeptic.

The writing staff telegraphed Chloe as Chelsea’s defender months before Egan returned to the cast following the birth of her child. Chelsea’s comeback includes accepting the position Adam created for her, with Chloe and Sally part of a team that seems destined to creatively clash before eventually collapsing.

Phyllis Summers’ (Michele Stafford) vision had her heading a solo effort, which she saw as a vehicle to re-establish her business and personal reputation via The Grand Phoenix Hotel. Nick Newman’s (Joshua Morrow) generosity and love made Red’s dream possible.

Devoted fans recall that Chelsea was briefly part of a business trio, along with the then single Abby Newman (Melissa Ordway). The arrangement was not desired by Phyllis, and Chelsea sold her share off. Abby left to start a spite hotel across the street that was later shelved.

The Young And The Restless Spoilers – Soapy Setup Is Terrific

Adam seems destined to couple with Sally. But anyone would make a mistake by counting Chelsea out. She always rebounds, in some form, and does not want to see her son’s (Connor Newman, as played by Judah Mackey) father attached to the likes of Sally.

With Chloe serving as a referee of sorts, TPTB have created a terrific soapy setup. Sally appears to have an in with Adam. But he shares history and potentially a future with Chelsea on Y&R.