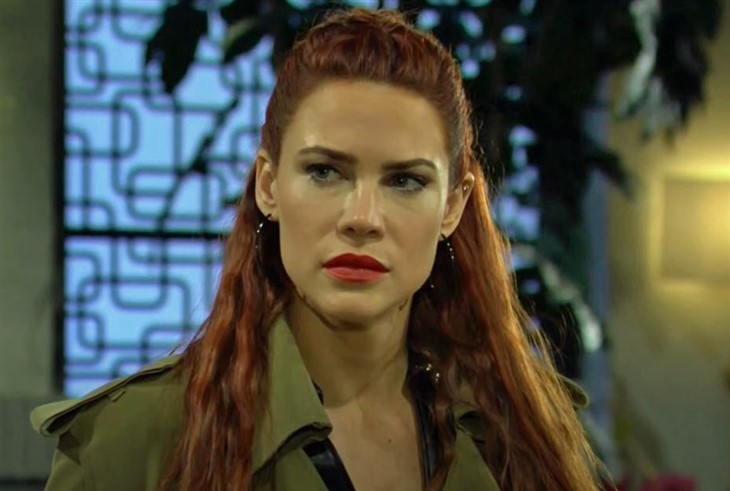 The Young and the Restless (Y&R) spoilers for Monday, January 3, 2022, reveal Chelsea Lawson seeing something that gets her blood boiling.

The Young and the Restless Spoilers: Chelsea Has Competition

Since Chelsea (Melissa Claire Egan) has been back in town, she has made it clear she wants Adam Newman (Mark Grossman) back and Adam has made it clear he’s not interested. Chloe Fisher (Elizabeth Hendrickson) had already warned Chelsea there would be competition when she returned in the form of Sally Spectra (Courtney Hope) and Chelsea is realizing that Chloe was absolutely right.

On Monday, Chelsea catches Sally and Adam in a compromising position and seethes with jealousy. As Chelsea sizes up the competition, her devious con-artist brain starts working in overdrive and even a con-artist like Sally might not even be safe. Does Adam really just like the same type of woman? Both Chelsea and Sally lie like they breathe and both are fashion designers. How…odd…

It’s been quite a year for Chance Chancellor (Conner Floyd). He married Abby Newman (Melissa Ordway) and learned they couldn’t make a baby together. Then, he skipped town and got lost and nearly killed on a secret government mission, all while Abby made a baby anyway using her egg and Devon Hamilton’s (Bryton James) sperm, as well as Mariah Copeland’s (Camryn Grimes) uterus.

Now, Chance is back, he and Abby can’t even calm this baby she brought into their lives, and he can see that Devon is the only one who can. Is Chance overwhelmed? He drops some truth bombs on Abby on Monday and his delusional wife probably doesn’t want to hear what she has to say.

As the new year begins, it’s been one year since Sharon (Sharon Case) and Rey Rosales (Jordi Vilasuso) said ‘I do.” It’s also been a year where they broke up several times, she had to learn to live under his rules, he nearly died, and Sharon learned that Nick Newman (Joshua Morrow) is free again, but she’s trying not to pay attention to that.

Is it too much to hope as Sharon and Rey reflect on their lives together that these two realize they are better off as friends? Stay tuned to The Young and the Restless weekdays to see how these stories play out.

B&B Spoilers: Brooke Wakes Up With The Wrong Man