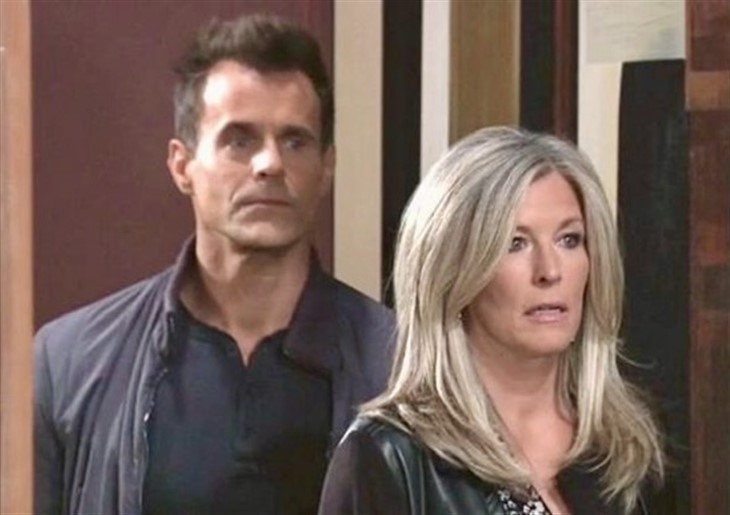 General Hospital spoilers reveal Carly and Drew continue to grow closer as much of the audience cringes at the awkwardness of it all — and the rewriting of storyline history.

Yes, it’s true that Carly Corinthos (Laura Wright) was one of Drew Cain’s (then played by Billy Miller) first friends in Port Charles. That’s when he thought his name was Jake Doe and GH believed he would be their second and final Jason Morgan. In fact, it was Carly who learned that Jake was really Jason and informed him of such just before he was about to marry Elizabeth Webber (Rebecca Herbst).

It was also Carly who dumped Drew like a hot potato the second she found out his name was really Drew Cain and the original Jason showed up back in town. Both Carly and Sonny Corinthos (Maurice Benard) seemed to want nothing to do with Drew at that point and to Carly, he was nothing but the father of the dying teenager that her daughter, Josslyn Jacks (Eden McCoy) was in love with.

Let’s also remember that brooding Drew. Sure, he’d have a twinkle in his eye at times that was never Jason Morgan-like at all, but there was also anger inside him about all that was taken from him over the years — namely, his own memories that still sit on a flash drive. In fact, NuDrew (Cameron Mathison) should be even angrier now after having two more years taken from him while he sat in a Grecian cell thanks to Peter August (Wes Ramsey) and Victor Cassadine (Charles Shaughnessy).

Drew lost time with his son, Oscar Nero, when Peter had him kidnapped the first time to turn him into Helena Cassadine’s Soldier Boy, and he lost more time with another child thanks to Peter, his daughter, Scout. Still, rather than being a brooding Drew, he now seems happier than he has ever been, with that Ryan Lavery smile that belongs in Pine Valley and not Port Charles.

Why is Drew so happy and why does he remember a friendship with Carly that wasn’t really a friendship at all? She thought he was Jason. That was their friendship after a while, one built on entirely false pretenses. We can understand why Carly would latch onto Jason’s brother because she has always latched onto anything Jason, but why is Drew so interested in her now? This pairing doesn’t work and is just one pairing in a long list of General Hospital pairings that don’t want to make us tune in tomorrow.

B&B Comings And Goings: A Cameo Appearance Dishes, A Fan Fave Is Back On The Case