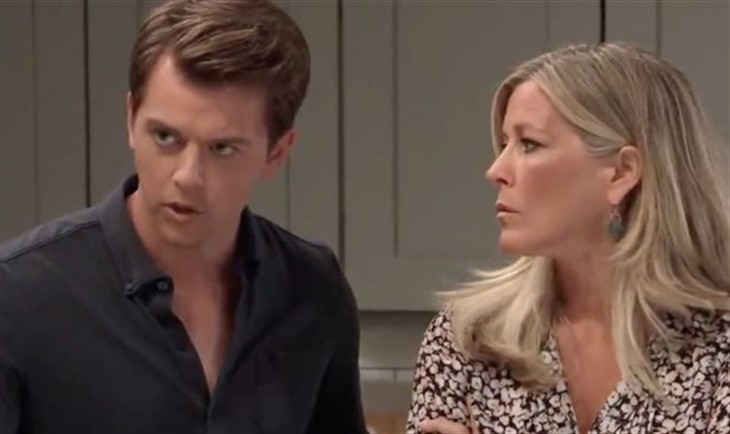 General Hospital (GH) spoilers tease that Carly Corinthos (Laura Wright) is holding on to a huge secret. While she has confided in Drew Cain (Cameron Mathison) that Harmony Miller (Inga Cadranel) told Carly that Willow Tait (Katelyn MacMullen) that not only was Harmony not Willow’s birth mother, but her biological mother is actually the person Carly hates most in the world, Nina Reeves (Cynthia Reeves). Carly and Drew decided to get a DNA test done to prove it and Carly is currently waiting for the results!

The results will most certainly prove that Willow and Nina are related, but Carly may opt to lie about it to Drew. Drew would insist that Carly tell both Willow and Nina the truth, and Carly won’t believe that’s the right thing to do. Instead, she may bring Michael Corinthos (Chad Duell) into her confidence. Michael and Willow are in love and have been waging a war of sorts against Nina in order to keep Nina from petitioning for visitation rights of Michael’s son, Wiley Corinthos (Viron Weaver). Nina is Wiley’s grandmother because her mother was Nelle Benson (Chloe Lanier) who was apparently Willow’s twin sister.

Michael hates Nina as much as Carly does. While he will hate keeping anything from Willow, he will believe that this secret is one best kept. He won’t want Nina to be close to Willow, because he will believe that Harmony was right. If Willow and Nina knew the truth, Nina would smother Willow with her love. Nina can be very needy and this would just be one more way that Nina is connected to his family. But secrets have a way of coming out in Port Charles.

Willow hasn’t been feeling great ever since she passed out in General Hospital weeks ago. Although it was attributed to stress and poor diet, there may be something else going on. If Willow gets truly sick, she may need a transplant or a blood transfusion from a blood relative. If that does come to pass, then Michael and Carly will be forced to reveal Willow and Nina’s connection. Willow will be furious that the truth was kept from her, no matter how much Michael and Carly will say it was in her best interest. This is one secret that could end Michael and Willow’s relationship for good.

What will the DNA test reveal? Will Carly tell Michael the results? Will Nina be needed to save Willow’s life? Anything can happen in Port Charles so stay tuned to General Hospital airing weekdays on ABC. And don’t forget to check back right here regularly for all your General Hospital news, information, and spoilers!