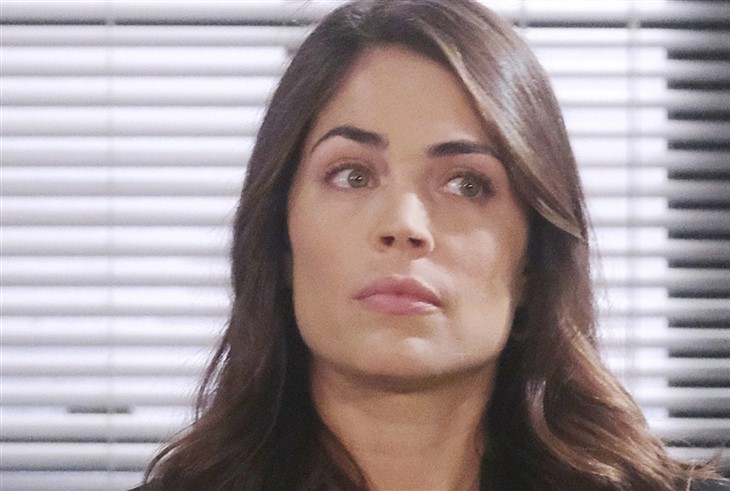 General Hospital (GH) spoilers and updates for Tuesday, June 7 tease there are truths and consequences for everyone, and that includes your Port Charles faves on GH!

General Hospital Spoilers – Now Is Not The Time To Turn Away

It looks like Stella Henry (Vernee Watson) is still at Curtis Ashford (Donnell Turner) and Portia Robinson’s (Brook Kerr) house where Marshall Ashford (Robert Gossett) was coming clean. Stella has some encouragement for someone as she tells them now is not the time to turn away; she may be encouraging Marshall to tell his whole truth.  Sometimes it is difficult to explain why one made a decision years ago that has long-reaching effects, but everyone seems to be very understanding and supportive.

Stella will continue to be supportive, as later in life she came to understand people reacting to things not real or in the past. She became an Alzheimer’s Disease advocate and helped Alzheimer’s patients and their families – in the sense of losing touch with reality, what Marshall went through was similar.

Liesl Obrecht (Kathleen Gati) is at the Metro Court talking to someone on the phone; she says this might be the most devastating! She could be talking to her niece Nina Reeves (Cynthia Watros) who was intending to meet up for coffee before she was stopped by Willow Tait (Katelyn MacMullen).  Or, she may be talking to Brad Cooper (Parry Shen) who is worried about her daughter and his best friend Britt Westbourne (Kelly Thiebaud) after her recent meltdown!  For sure, Nina has dealt with the more devastating of circumstances losing the right to see her grandson Wiley Corinthos (Viron Weaver) but there’s something behind Britt’s meltdown as well! Liesl looks quite concerned and is at the ready to jump into action to help whoever it is!

General Hospital Spoilers – How Come You Didn’t Come Back Years Ago?

Back at Curtis and Portia’s house, Curtis and Marshall are still talking after Marshall’s reveal that he suffers from paranoid schizophrenia; Curtis remaining very understanding and compassionate. Feeling love and acceptance, Marshall will continue to open up to his son and tell him truths long hidden and why he was afraid to tell. Curtis wants to know how come Marshall didn’t come back years ago, after his diagnosis and going on medication – Marshall should explain that sometimes it takes a lot of experimentation.

Schizophrenia, and especially paranoid schizophrenia is a very complicated disease and sometimes it takes doctors a lot of trial and error to find the perfect combination of drugs that work. Marshall should explain that his first trip to the psych ward may have not been his last!

GH Spoilers – Welcome To Your Intervention

At a room in the Metro Court, Brad tells a bedraggled Britt “welcome to your intervention” whether she wants one or not! Liesl will be in the room as well as they try to get Britt straight after her meltdown and find out what caused it. Brad overheard Britt ranting drunkenly to Terry Randolph (Cassandra James) before Cody Bell (Josh Kelly) dropped in for a visit and took Britt with him about true love leaving and dying. It sounds like the concern is that Britt has pushed down her grief about Jason Morgan’s (Steve Burton) death and it’s all gotten to her and come to the surface! That can cause a lot of depression and anxiety inside and it’s probably time that Britt admits her love and her heartache!

General Hospital Spoilers – If You Lose Sight, We All Lose!

At the Quartermaine stable, attached below the Quartermaine mansion, Michael Corinthos (Chad Duell) confronts Ned Quartermaine (Wally Kurth) who has given him a counter-proposal. Michael is worked up and angry as usual as he tries to drill into Ned’s brain if he loses sight, they all lose! Valentin Cassadine (James Patrick Stuart) has been keeping pressure on Ned to team up with him, so that they both don’t lose, and Michael starts in with the pressure not to defect!

Ned hasn’t been given the position of power that he’s wanted from either Michael and Drew Cain (Cameron Mathison) or Valentin’s deal he’s trying to get him to agree to! Ned looks frustrated and impatient as Michael continues to nag him!

Meanwhile, Drew is with Carly Corinthos (Laura Wright) at the Metro Court pool, where she’s putting the pressure on him! Carly tells him she’s willing to help him save ELQ whether he wants it or not, and all he can do is shake his head! Carly is very stubborn and insistent when she has a plan in her head as Drew has found out, and if and Michael disagree with her plan it won’t matter. Carly will just go ahead and do as she darn well pleases anyway – like she said, whether they want the help or not!

At Volonino’s Gym, Sonny Corinthos (Maurice Benard) tells someone he thinks he knows who’s behind it. Brando Corbin (Johnny Wactor) has some suspicions about Sonny’s new employee Dex (Evan Hofer).  Dante Falconeri (Dominic Zamprogna) has also had his suspicions, and later this week they’ll team up to check Dex out more thoroughly.

Previous GH episodes revealed Sonny was impressed at seeing Dex break up a fight in the boxing ring and was reminded of a much younger Jason. Needing an enforcer, he asked him to come in and talk about the job!