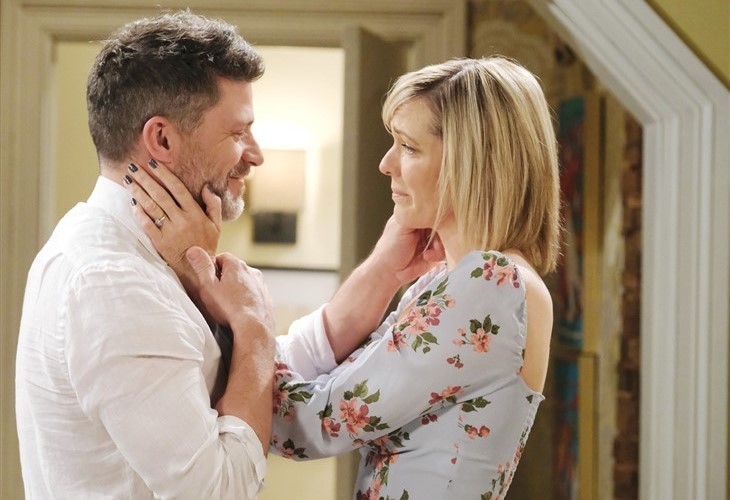 Days of Our Lives (DOOL) spoilers for Wednesday, June 22, 2022, reveal Eric and Nicole sharing a moment that could change everything.

Days Of Our Lives Spoilers – Rafe Hernandez Out In The Cold?

It’s been more than two decades, but Eric Brady (Greg Vaughan) and Nicole Walker (Arianne Zucker) are still dancing around their feelings for one another. So what if they spent an entire year married? It’s not like Eric actually treated it like a marriage and was present for that year. Instead, he was in Africa and Nicole got sick of it and drunk, so she stupidly slept with Xander Cook (Paul Telfer), which effectively ended her marriage.

Now, she’s postponed her wedding to Rafe Hernandez (Galen Gering) to the relief of fans everywhere and Eric knows. Eric is also no longer a priest and doesn’t plan to return to Africa. He is also still very much in love with Nicole and if he’d just say the word already, she’d dump Rafe like a hot potato.

So, does he say the word in this close moment they share on Wednesday? We’re sure Nicole would like him to say the word because it’s clear that she really, really does not want to marry Rafe. Of course, she could always just not marry Rafe no matter what Eric decides to do.

DOOL Spoilers – Surprises At The Wedding

This time around, Abe Carver (James Reynolds) and Paulina Price (Jackee Harry) managed to get married on a very special day, but that doesn’t mean they didn’t do it without a big secret between them.

Whether it’s that secret that comes out or not remains to be seen, but Abe does learn something that can ruin his marriage before it starts. Oddly, it’s up to Julie Williams (Susan Seaforth Hayes) to smooth things over. What will she do? If it’s the TR Coates (William Christian) secret that comes out, we can definitely see Julie defending Lani Price Grant (Sal Stowers) considering what he did to Eli Grant (Lamon Archey).

Meanwhile, Chanel Dupree (Raven Bowens) has quite a time at this wedding with two twins fighting over her. She is going to have a big decision to make soon. Does she want to be with Allie Horton (Lindsay Arnold) or her brother, Johnny DiMera (Carson Boatman)? Isn’t it great to have choices like that? Stay tuned to Days of Our Lives weekdays to see how these stories play out.