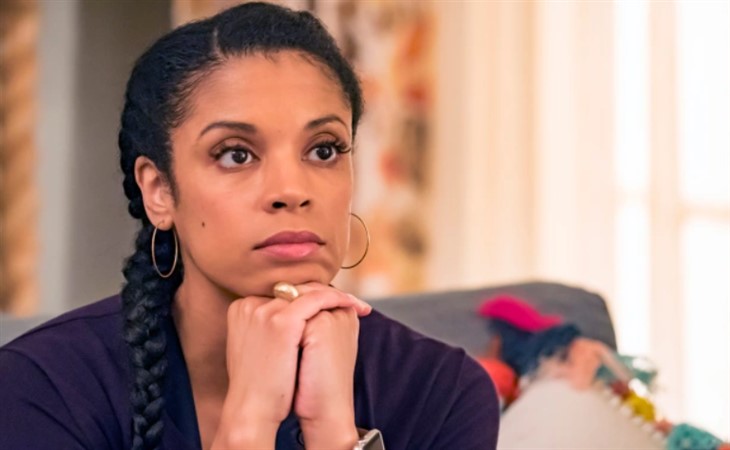 This Is Us spoilers tease that the final season of the beloved Pearson family drama will unveil more about fan favorite Beth (Susan Kelechi Watson). And now Susan herself has served up hints, discussing how she views her character’s courage. But the actress, who co-wrote the This Is Us script for “Our Little Island Girl: Part Two,” also reflected on what the most recent episode revealed.

Find out what Watson shared about Beth. And discover what upcoming This Is Us episodes might show about how Beth’s inner strength becomes so key to other Pearson family members. (Warning: Spoilers for “Our Little Island Girl: Part Two” below!)

This Is Us Spoilers – Susan Kelechi Watson Talks Beth’s Courage!

This Is Us creator Dan Forgelman gave his cast the chance to direct or write an episode. And for Susan Kelechi Watson, penning the “Our Little Island Girl: Part Two” episode became the perfect match of talent and desire. As a result, she told EW that stepping back from her character Beth as a writer allowed her to appreciate the dancer/mom/wife’s inner strength.

For Susan, the most “exciting” part of doing double duty as a writer and an actress came in allowing Beth to face with her past. “It was this moment where she was going to release this shame that she’s been carrying, and really step into a new version of herself and really embrace who she is now,” pointed out Watson. And in the process, Beth succeeded in confronting someone “who made her feel small in the past.”

Beth is taking center stage, reclaiming her power, and vanquishing more demons from her past on #ThisIsUs. @skelechiwatson and @freboni09 break it all down for us. https://t.co/MoQNkt5BEw

As the episode revealed, in the end Beth validated herself. And she replaced her feelings that she had not lived up to her dance background by recognizing her future destiny. “What’s great about her [is] she ends up validating it for herself and saying, ‘Yeah, I’m not the person who’s meant to be in the spotlight, but I do a hell of a job in the wings.’ That’s just as important for different reasons. I found that to be a beautiful surprise at the end of this,” summed up Susan.

This Is Us Spoilers – What Role Will Beth Play In Final Season?

But looking ahead, Susan Kelechi Watson also teased what role Beth will play in future episodes. For instance, Deja (Lyric Ross) has battled with Beth’s husband Randall Pearson (Sterling K. Brown) over her desire to move in with her boyfriend Malik (Asante Blackk). “Look, Deja’s getting older and feeling herself and feeling like she wants to start doing some decision-making for herself and she’s very much in love and it’s her first love,” noted Susan.

“But as she starts to get in over her head and some of this decision making, Beth and Randall are definitely going to have to continue to step in there and to figure it out.” And the drama definitely won’t get limited to the future of Deja and Malik, promised Watson. Prepare for the sixth and final Thanksgiving for the Pearson family!

Thus far, that holiday has always served up family drama, trauma, and traditions like Pilgrim Rick’s hat. And once again, promised Susan, viewers will discover that for the Pearson family, Thanksgiving will “always bring drama.” But could Beth step in and shake up those traditions? Tell us what you predict for Susan Kelechi Watson’s character on the remaining This Is Us season 6 episodes! And after you’ve shared your views, check back on our site for more TV news.

90 Day Fiance: Varya Opens Up About War In Ukraine