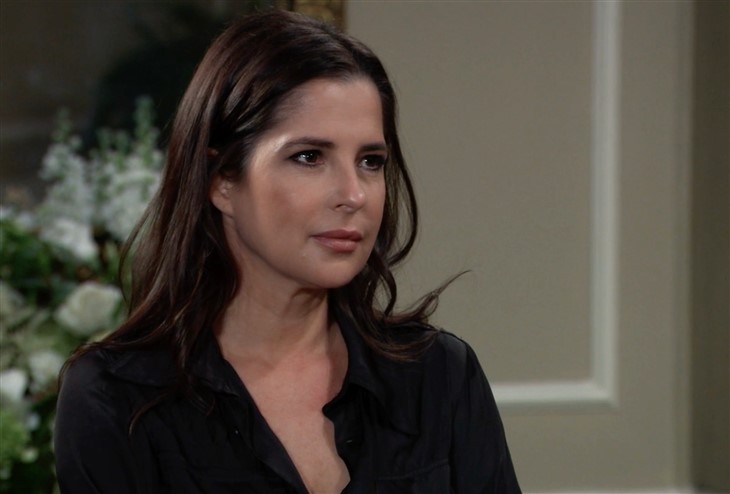 General Hospital Spoilers tease that ever since New Year’s Eve, Elizabeth Webber (Rebecca Herbst) has been “haunted” by what appears to be the ghost of her late husband, Franco Baldwin (Roger Howarth). First, she finally took off her wedding ring at home, only for it to appear in her locker at General Hospital. Then, someone set fire to Franco’s art studio and finally someone shred her wedding dress. Finally, she received a card signed “B” from someone letting Elizabeth know they were thinking of her on her anniversary!

General Hospital Spoilers – Is an overworked Elizabeth Webber Suffering From A Mental Break?

General Hospital spoilers tease Elizabeth has been working extra shifts and seems to be overly tired. Could she have had some sort of mental break and doing these things to herself? Hamilton Finn (Michael Easton), who has developed feelings for Elizabeth, has noticed that she has been working herself into exhaustion. It seems likely that Liz may have had some sort of mental breaks and is doing all these things herself, without realizing it.

A part of Liz may not be ready to move on from her marriage, and this is her minds way of coping. But there are other possibilities as well, and Elizabeth may turn to Sam McCall (Kelly Monaco) to help her get to the bottom of what is really going on.

While Sam and Elizabeth have never really gotten along, Sam is a detective and may be the best person to help Elizabeth right now. Elizabeth believed that “B” was actually Betsy Frank (Deborah Strang), Franco’s adoptive mother. It would make sense that Betsy wouldn‘t want anyone to forget her son. Perhaps she is behind the “hauntings” in order to make sure that Elizabeth never forgets her late husband. That is likely where Sam would start her investigation. Betsy may not be the guilty party, but she might know who it is.

General Hospital Spoilers – Heather Webber May Be Back!

Heather Webber (Robin Mattson) is Franco’s biological mother, and the two became closer at one point. She loved Franco and although she is mentally ill herself, she seems like the most likely person to be haunting Elizabeth is she isn’t doing it to herself. Sam may think Heather is behind everything and she just might be right. If so, hopefully Elizabeth can make sure to let her know that Franco will never be forgotten, even if she begins a romance with Finn!

Has Elizabeth suffered some sort of mental break? Or is Betsy Frank the true culprit? What about Heather Webber? Anything can happen in Port Charles so stay tuned to General Hospital airing weekdays on ABC. And don’t forget to check back right here regularly for all your General Hospital news, information and spoilers!