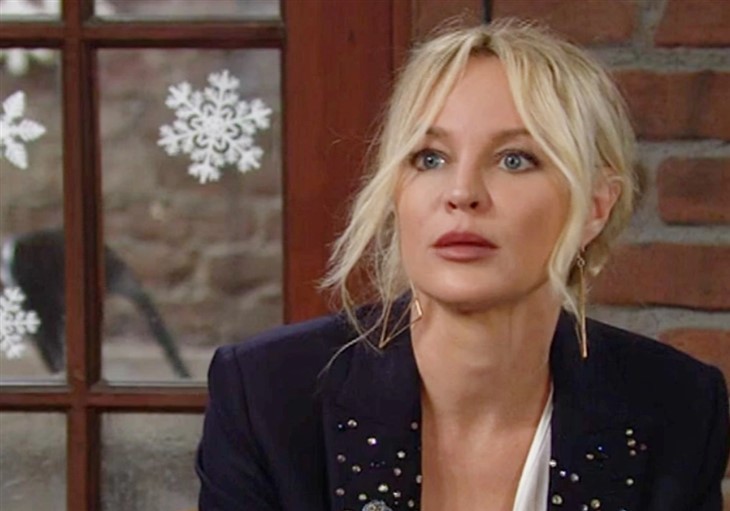 Viewers of The Young and The Restless will see Rey and Sharon talking about the latest family wedding news in an upcoming episode of The Young and The Restless, as country music plays in the background at Crimson Lights. Viewers will recall the recent engagement of Mariah Copeland (Camryn Grimes) and Tessa Porter (Cait Fairbanks) and Sharon giggles as Mariah texts her suggestions for a wedding venue, such as the old GC Buzz studio, a tattoo parlor, or perhaps a recording studio.

Rey smiles as well, remembering those places represent moments in the couple’s love story, but Sharon is really hoping they take their time in planning their wedding so it will be the one of their dreams. Rey certainly thinks that they deserve that, hoping Sharon won’t be an interfering mother of the bride because it will be amazing no matter the venue, as long as the wedding goes off with no problems.

Rey comments that he thinks Sharon is overreacting, and after all, he’s a trained detective and can’t see all the signs, semi-sarcastically, but Sharon tells him that’s not what she meant! She assures him he is a great stepfather to her children and would never mean to imply that he has any lack of insight where they are concerned, and he thanks her. He realizes that she and Nick have their own perspective when it comes to their children together.

Viewers of The Young and The Restless will see Sharon and Rey call each other hot grandparents, and agree it will be great that Rey will be there from the beginning when Tessa and Mariah start their family. Then she spots Chelsea Lawson (Melissa Claire Egan) and Chloe Mitchell (Elizabeth Hendrickson) enter, and overhears their conversation about the Newman Fashion platform ,which gets a little heated, and Sharon goes to their table.

Viewers of The Young and The Restless will recall that Chelsea’s having problems working with Sally Spectra, (Courtney Hope) and Sharon wonders if it’s personal-Chelsea denies it, and Chelsea goes to get them some sugar. Then Chelsea spots Rey – and Sharon keeps an eye and an ear on their conversation; she hadn’t realized Rey and Chelsea were such close friends as Chelsea thanks him for a present he bought Connor Newman (Judah Mackey).

Viewers of The Young and The Restless will see Sharon and Chloe both approach Chelsea where she has been talking to Rey, Chloe wanting to know what’s taking so long! Chelsea admits she forgot about the sugar, having started talking to Rey instead, and she thanks him again, telling him to “stay sincere”.

Chelsea says being sincere is such a rare occurrence for her – and he doesn’t think it should be, piquing Sharon’s attention, as she raises her eyebrows, and continues to listen! Finally, Chloe and Chelsea leave and Sharon questions Rey as to how his conversation with Chelsea went; he tells her she’s got a good attitude, but it will be tough for her to move on from Adam Newman (Mark Grossman). Sharon notices the difference in Rey, not realizing he and Chelsea had such a good rapport and apparently talk often; Rey just thinks talking to mothers about their kids does that.