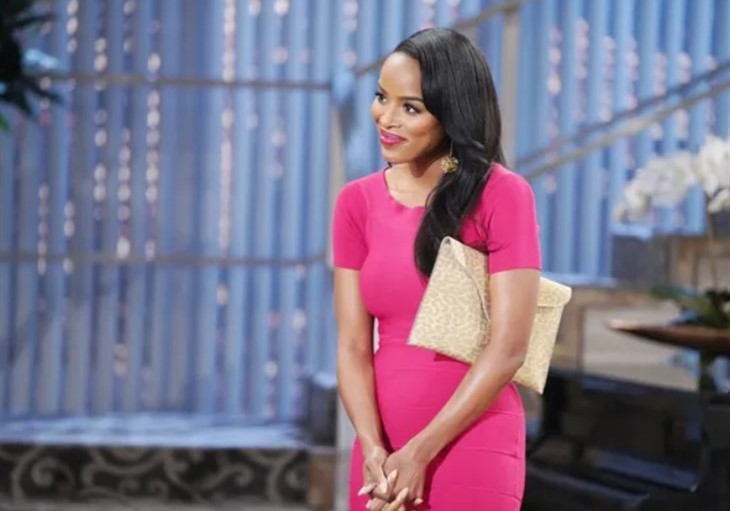 The Young And The Restless Spoilers – Nate Hastings’ Request

Y&R spoilers for the week of June 27 reveal that Elena and Amanda Sinclair (Mishael Morgan) will both go out of town. That means there will be no one to keep an eye on Imani. The lawyer gets her chance to get closer to Nate, who has a surprise for Elena.

Nate asks Imani to get Elena out of her contract with Newman Media. Nate’s plan is to bring Elena on board at Chancellor-Winters and surprise her with the amazing opportunity.

Imani is enjoying doing work with Chancellor-Winters but it’s because of her constant access to Nate. Imani knows that if Elena ends up coming to work for the company, then it means she has fewer opportunities to get her claws in Nate.

Plus, Imani is enjoying getting closer to Nate while the heavy work demand builds distance in Elena’s relationship. If Nate and Elena start working together again, it will ruin Imani’s plan. So, expect Imani to do something to make sure Elena doesn’t end up at Chancellor-Winters. Imani might also try to seduce Nate while Elena and Amanda are both out of town.

The Young And The Restless Spoilers – Phyllis Summers Bashed

The Young and the Restless spoilers reveal that one must-see moment features Jack bashing Phyllis. Phyllis asks Jack to come over so they can talk. Then, Phyllis makes her speech and tries to smooth things over with Jack.

Another must-see moment during the week of June 27 features Ashland and Victoria Newman (Amelia Heinle). It seems Victoria has a plan on how to make Ashland pay with his heart as well as his pocketbook.

If Victoria isn’t careful, Ashland could figure out her scheme, though. It is teased that Ashland makes a shocking discovery. Is that discovery what Victoria has planned for him? Or could Ashland find out the truth when it’s already too late?

Which storyline are you looking forward to seeing during the week of June 27? What are your predictions for Ashland, Victoria, Elena, Nate, and Imani? Share your thoughts and remember to keep watching the CBS soap to see what happens next.

The Duggars Spoilers: How Much Money Is Anna Duggar Worth?