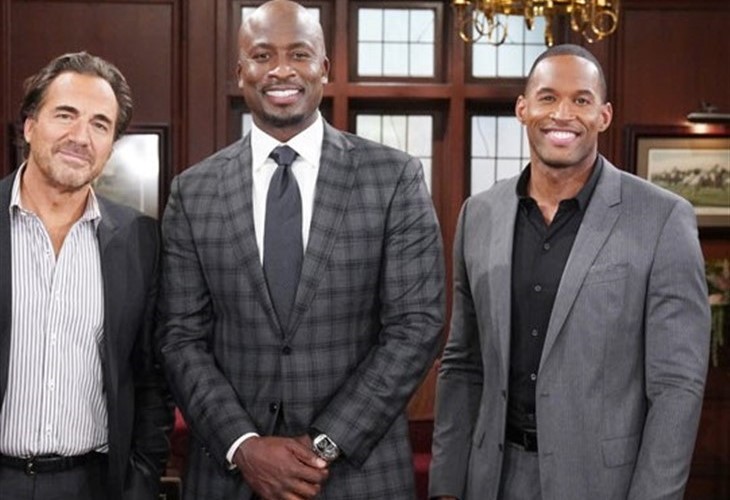 The Bold and the Beautiful spoilers and updates tease that Akbar Gbajabiamila has landed a gig on the daytime drama. The actor will debut as a new Forrester employee, who’s also a friend of Carter Walton (Lawrence Saint-Victor). Gbajabiamila is scheduled to appear as Max on January 18.

Viewers may recognize Gbajabiamila since he’s a former professional player in the National Football League (NFL). Fans may have also seen him on the American Ninja Warrior television series and as a co-host of CBS’ The Talk.

Brooke Logan Forrester (Katherine Kelly Lang) reminds Deacon that he’s not supposed to come into her home. She tells him this after the latter confessed that he still loves her.

For Deacon, it’s more than just an admission. He wants to be with Brooke for good. But the latter doesn’t seem to feel the same way. For now, she just wants Deacon to disappear.

Ridge Forrester (Thorsten Kaye) will continue his conversation with his kids, Steffy Forrester Finnegan (Jacqueline MacInnes Wood) and Thomas Forrester (Matthew Atkinson), regarding Brooke. He makes it clear that he and Brooke will be fine even though Steffy has been trying to make him feel that Brooke isn’t good for him.

Ridge will make it clear that Brooke is his wife and Steffy and Thomas need to deal with it. Will Steffy give up in trying to push Ridge towards Taylor Hayes (Krista Allen)?

The Bold And The Beautiful  – Brooke Logan’s Secret

Ridge won’t tell Steffy and Thomas about Brooke’s relapse. But later on, he’ll have a serious conversation about it with his wife. He believes that she’s just feeling guilty because she drank on New Year’s Eve.

However, he doesn’t know about her secret about Deacon. Will Brooke feel even more guilty as her husband continues to encourage her?

Fans know that Brooke only confessed to her drinking. She didn’t say anything about kissing and spending the night with Deacon. As Ridge continues to be a good husband, will Brooke’s guilt finally force her to come clean to him? Or does Ridge find out about it from someone else? If that happens, will their marriage survive? Or will it be the reason for Ridge to turn to Taylor for comfort when he learns about his wife’s betrayal?