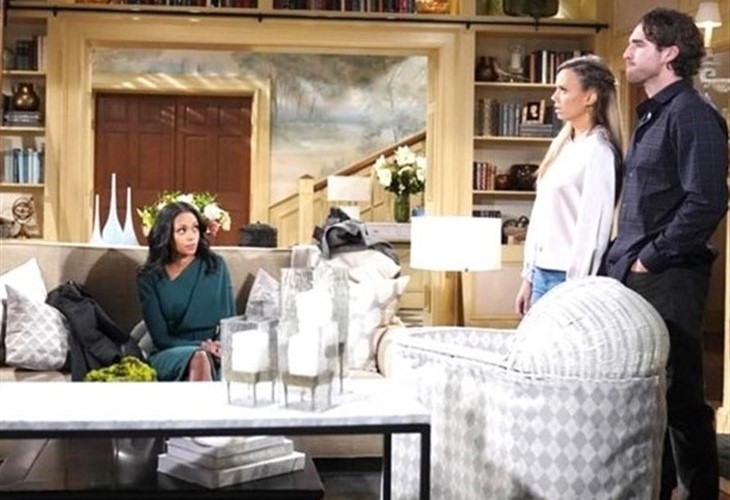 The Young and the Restless spoilers reveal that Amanda Sinclair (Mishael Morgan) gets Chance Chancellor (Conner Floyd) to open up to her. Later, she tells Devon Hamilton (Bryton James) that in order to win custody, they will have to put Chance on trial. With Chance’s PTSD getting worse, could Devon and Amanda actually win the custody case?

The Young And The Restless Spoilers – Abby Newman-Abbott-Chancellor Betrayed

Y&R spoilers reveal that in Monday’s episode, Abby Newman-Abbott-Chancellor (Melissa Ordway) will find out Devon is pursuing a custody case. Abby is furious and confronts Devon. During their heated discussion, Abby makes it clear that Dominic Newman-Abbott-Chancellor (River and Rainn Ware) already has a father named Chance. Then, Abby asks Devon how he could betray her after everything they’ve been through.

While Devon and Abby are losing their tempers, Amanda and Chance have their own conversation. Chance admits that it might have been a mistake to open up about his struggle with Devon. Amanda assures Chance that there is no such thing as being too honest.

Then, she opens up about her not having parents. Amanda explains how it affects her seeing Dominic with so many adults that care about him. It is Amanda trying to get Chance to open up and it works. Unfortunately, Amanda uses the information to come up with a legal strategy.

The Young And The Restless Spoilers – Chance Chancellor On Trial

The Young and the Restless spoilers reveal that Devon and Amanda talk about the custody case when they return home. Devon tells Amanda how upset Abby is about it. Then, Amanda informs Devon that she has a legal strategy that will help them win. Amanda warns him that it might mean losing his friendships with “Chabby” forever. Then, she suggests that they put Chance on trial.

Devon and Abby have been close friends for a long time. One would think that he would do anything to preserve that friendship. However, Devon still wants to proceed with the custody case.

Don’t expect a quick resolution to the issue, either. Bryton hinted to Soap Opera Digest that this storyline might linger for a while. Plus, it’s not “Chabby” that Devon and Amanda need to worry about. Just wait until Victor Newman (Eric Braeden) finds out what they are doing!

What do you think Victor is going to do when he finds out about Devon’s custody battle? How will Devon and Amanda’s lives be affected when Victor takes action? Do you believe that Devon has a case, or does he not have a leg to stand on when it comes to Chance and Abby’s baby?