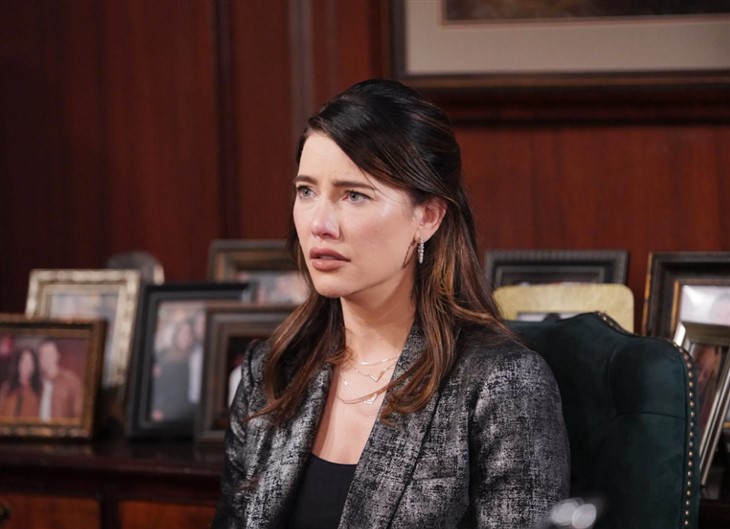 The Bold and the Beautiful spoilers reveal that John “Finn” Finnegan (Tanner Novlan) and Steffy Forrester Finnegan (Jacqueline MacInnes Wood) will probably have a reunion party. However, Sheila Carter (Kimberlin Brown) isn’t dead no matter what the police say. Could Sheila crash the reunion party and if so, will Finn be forced to kill his own birth mother?

The Bold And the Beautiful Spoilers – Liam Spencer’s Party Idea

B&B spoilers reveal that Liam Spencer (Scott Clifton), Hope Logan Spencer (Annika Noelle) and Brooke Logan Forrester (Katherine Kelly Lang) all talked about the miracle of Finn being alive. Liam mentioned that they should throw a party for Finn and Steffy. Ridge Forrester (Thorsten Kaye) walked in and thought it was a good idea.

So, that pretty much hints that Finn and Steffy will have a party to celebrate their miracle. Of course, they might believe Detective Alex Sanchez’s (Jeremy Ray Valdez) claim that Sheila is dead. In a preview clip, Brooke questioned Sanchez’s claim. Plus, fans have already predicted that Sheila is still alive.

As fans know, pretty much every celebration in the soap ends with a shocking bombshell or unexpected twist. As Finn and Steffy celebrate with their loved ones, they could be blindsided by an unexpected guest. Just as what happened at their wedding, Sheila could crash the reunion party.

The Bold And the Beautiful Spoilers – Deadly Showdown Teased

The Bold and the Beautiful spoilers reveal that Sheila knows that Finn wants nothing to do with her. Sheila also won’t go down without a fight and certainly won’t allow herself to go to prison. So, could Sheila crash the reunion party with guns blazing?

Will Sheila threaten to kill Steffy if Finn doesn’t come with her? Or could Sheila have done something to Steffy’s nanny, Amelia (last played by Nicola Posener)? Maybe Sheila knocks Amelia out and grabs Hayes Forrester Finnegan (Piper Harriot). Then, Sheila could crash the party and make demands using the baby as a shield.

Finn blames himself for bringing Sheila into their lives. Sheila nearly ended Finn and Steffy’s marriage. Finn nearly ended both Steffy and Finn’s lives. So, Finn might think he has to do something to end Sheila’s reign of terror. There are fans who speculate that there is only one person who should kill Sheila, which could be her own son.

What do you think is going to happen as Finn and Steffy celebrate their miracle? Will Sheila crash the reunion party? Will Sheila try to use Hayes as a shield? Will it be up to Finn to kill his own birth mother to save everyone else he cares about?