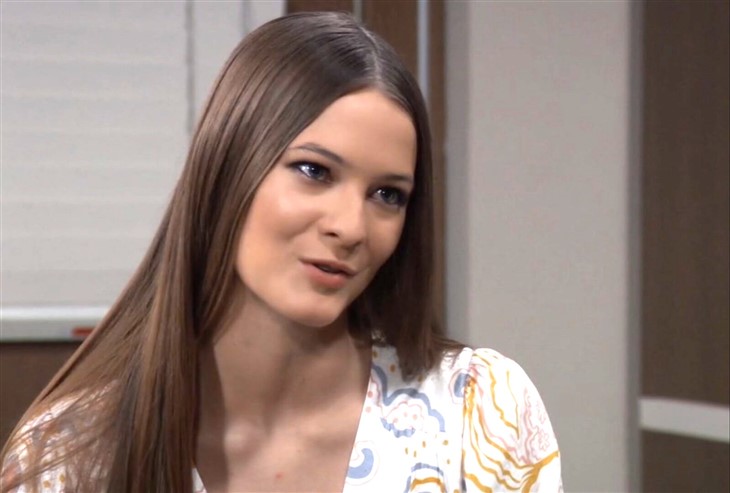 General Hospital spoilers reveal that Esme Prince’s (Avery Kristen Pohl) body hasn’t been found. That means Esme will turn up when it’s least expected. However, Esme might not tell the police what happened. Instead, Esme could use it as leverage. Will Nikolas Cassadine (Marcus Coloma) and Ava Jerome Cassadine (Maura West) be forced to comply with Esme’s demands?

GH spoilers reveal that Nikolas and Ava don’t know if Esme is dead or alive. Of course, with a fall like that, most people would assume Esme couldn’t have survived. However, Ava knows that until Esme’s body is found, there is always a chance she is still out there somewhere.

Before Ava could answer Willow’s question about a name, she made a comment about never knowing when one’s time is up. Due to Willow’s possible leukemia diagnosis, this caused the nurse to walk away from the computer. Ava was a bit baffled but took the opportunity to check for Esme’s name as well as any anonymous patients.

Ava called Nikolas and told him that Esme wasn’t in the hospital or morgue. However, Ava also warned him that it means Esme could still be out there. This is exactly what fans are predicting, especially since Pohl recently signed a three-year contract.

It isn’t a matter of it Esme returns, but how and when. Plus, there are still so many unanswered questions about Esme. So, expect her to come back when people least expect it.

General Hospital spoilers reveal that when Esme returns, she could have leverage. Ava could go to prison for attempted murder and Nikolas might be charged with covering up a crime. Esme could use this angle to get what she wants from Nikolas and Ava. However, don’t expect Esme to ask for money. Instead, Esme will want something else.

There are two things that Esme wants more than anything. One is to please her alleged father, Ryan Chamberlain (Jon Lindstrom). Even though Nikolas and Ava are separated, Ryan’s goal is completely accomplished yet.

The other thing that Esme wants – probably even more than dividing Ava and Nikolas – is payback. Esme will want to make Ava as miserable as possible. What better way for that to happen than Ava being forced to live and maybe even work with Esme? We have a feeling that this story isn’t ending, it’s just beginning. Share what you think will happen when Esme resurfaces.