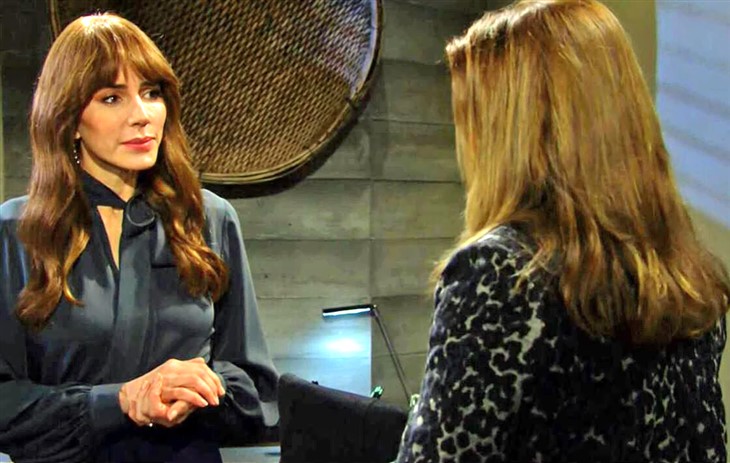 The Bold And The Beautiful Spoilers -Brooke Logan Forrester’s Struggle

B&B spoilers reveal that Sheila is responsible for Brooke’s relapse. Unknowingly chugging down a bottle of non-alcoholic champagne, viewers probably thought that would be the end of it. Brooke would go to bed and get back on the wagon the next day.

However, that is not what happens. After the champagne, it triggered the craving for alcohol that Brooke hasn’t had for a long time. So, she drank some more, played around with Deacon Sharpe (Sean Kanan), then woke up with him in bed next to her.

Even though Brooke confesses she relapsed to Ridge and Hope Logan Spencer (Annika Noelle), she will continue to struggle. Brooke suddenly starts craving alcohol each time she’s under stress, especially when keeping her activities with Deacon a secret from Ridge.

Sheila isn’t done with her attack on Brooke. If Sheila continues to use alcohol to get payback, then Brooke will eventually succumb to temptation. Ridge will support her at first, but at some point, he might walk away from the marriage.

The Bold and the Beautiful spoilers reveal that Taylor would love to have Ridge back. However, she won’t interfere with Ridge and Brooke’s marriage. Taylor just wants to see Ridge happy. As long as he stays with Brooke and is working on his marriage, Taylor will try to be supportive.

With that being said, Taylor and Ridge could reunite if he walks away from Brooke. Even though Taylor is afraid of getting hurt again, if she believed the marriage was really over, she’d jump right back into Ridge’s arms.

Right now, Sheila keeps gushing about what a “wonderful woman” Taylor is. However, it is teased that Sheila begins to get suspicious of Taylor’s reason for making her Christmas wish come true. Sheila doesn’t like to be deceived or tricked… even though Taylor had a very good reason for wanting to secretly evaluate the villain.

Sheila has her own reasons for targeting Brooke, but could turn it around on Taylor. Sheila could say that she eliminated Brooke for Taylor in order to “thank” her for Christmas. Then, Sheila might demand that Taylor repay the “favor.”

Under normal circumstances, Taylor wouldn’t make any kind of deal with Sheila. What makes this different is Taylor might not be able to handle losing Ridge to Brooke all over again. The question is what will Sheila demand that Taylor do in order to keep Ridge in her bed?