The Bold And The Beautiful (B&B) Spoilers: Sheila Gloats…But Will She Slip Up? 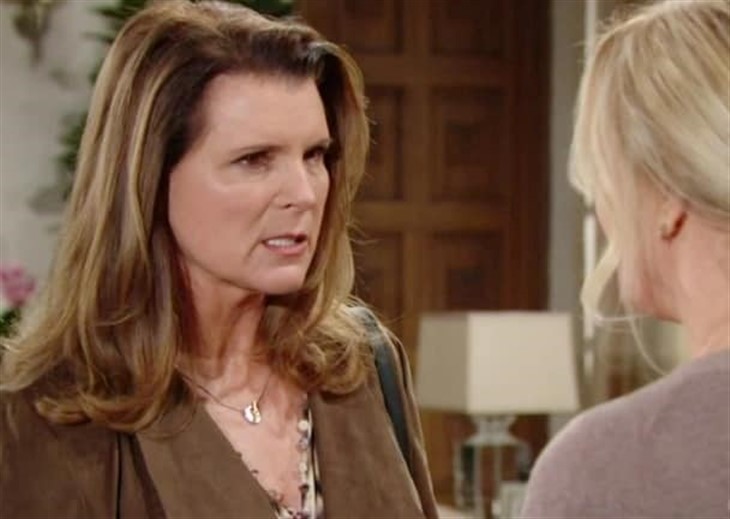 The Bold and the Beautiful (B&B) spoilers for Tuesday, March 1, 2022, reveal Sheila Carter feeling pride and wanting to shout her big accomplishment to the world.

The Bold And The Beautiful Spoilers – Crazy Women Have Big Mouths

Sheila (Kimberlin Brown) can’t believe her scheme to break up Ridge Forrester (Thorsten Kaye) and Brooke Logan Forrester (Katherine Kelly Lang) actually worked. That means she accomplished one of those not-so-rare feats on this soap since they have been breaking up to make up for 35 years. And now he is back with Taylor Hayes (Krista Allen), as usual, which makes Taylor happy.

So, when she runs into Brooke, she can’t help but gloat. However, Brooke is still insistent her marriage can be saved. That’s when Sheila is just ready to tell her that she is the one who ruined her life, but she manages to stop herself. That self-restraint will not last for long because her loose lips certainly do the talking by the end of the week.

Even Sheila Carter seems to have more self-restraint in life than Carter Walton (Lawrence Saint-Victor), who has demonstrated over the last year that he is one lonely man. From Zoe (Kiara Barnes) to Quinn (Rena Sofer) to almost Katie (Heather Tom) and now he’ll always have Paris — at least for now.

Carter has been doing everything he can to resist Paris Buckingham (Diamond White), but it’s been to no avail. He even knows her mother is watching him at every turn to make sure he stays away from another one of her daughters. He also doesn’t want to hurt his pal Zende Forrester (Delon De Metz), who is in love with this woman and wants to marry her.

Poor Carter is not sure how he feels, but he finally gives in to temptation (as Paris has been very insistent) and they take their relationship to the next level. Will it lead to anything more? We know Paris wants more but does Carter? Or will he regret what he did in the morning? After all, this is definitely a betrayal of his friendship with Zende and there will be hell to pay if Grace Buckingham (Cassandra Creech) finds out. Stay tuned to The Bold and the Beautiful weekdays to see how these stories play out.