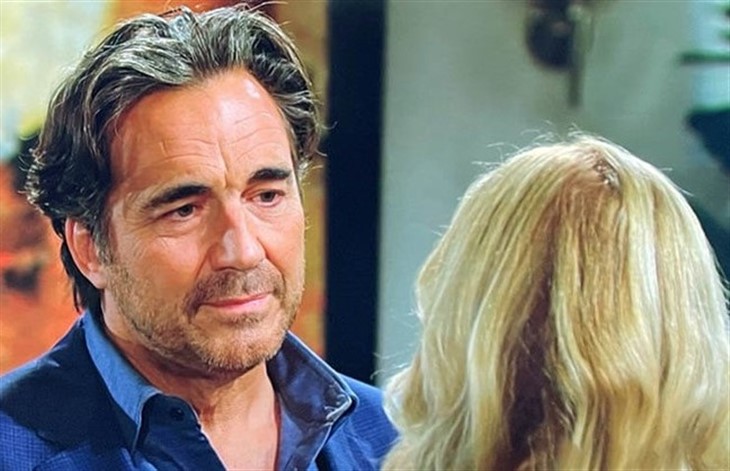 The Bold and the Beautiful (B&B) spoilers document that Ridge Forrester (Thorsten Kaye) made a decision he felt had to happen. He told Brooke Logan Forrester (Katherine Kelly Lang) that they could not continue and left the mansion.

Ridge, Steffy Forrester Finnegan (Jacqueline MacInnes Wood), and Thomas Forrester (Matthew Atkinson) reconvened the next day at Forrester Creations. The talk led to Ridge acknowledging that let Brooke know how he was feeling.

Steffy took that information, called her mother in the hallway, and Taylor bee-lined to FC. Family hugs followed, with Ridge and Taylor Hayes (Krista Allen) agreeing it is best if he lives in the guest house at the cliff house. So, does that leave an opening for Brooke to salvage matters?

The Bold And The Beautiful Spoilers – Brooke Logan Forrester Stays On At FC?

So, Ridge is in the guest house, and Taylor remains in the upstairs room at the cliff house. Brooke remains at her mansion alone, with Deacon Sharpe (Sean Kanan) soon testing whether he has permission to see her more freely now that Ridge is gone.

But work is different, as viewers recall when Eric Forrester (John McCook) initially decided to cut his wife, Quinn Fuller (Rena Sofer), out of his life. That included his impulse decision to end her jewelry line. Carter Walton (Lawrence Saint-Victor), who Quinn was involved with, and Eric almost instantly forgave, talked him out of nixing the line, which was and remains highly lucrative for FC.

Quinn was supposed to work off-site because Eric could not stand the sight of his estranged wife. This situation is different, as Ridge feels sad about the end of their latest marriage, is telling his children that he will always love Brooke, and she will remain a part of his life. That implies Brooke will continue to be seen at FC.

Ridge has decided not to live with Brooke any longer. It appeared as though Ridge requested a divorce in the recent past. But that was eventually revealed as part of Quinn’s orchestrated attempt to split him from Brooke so he could marry Shauna Fulton (Denise Richards).

The marriage Ridge and Shauna had in Las Vegas, Nevada was a sham. Kaye’s character was extremely inebriated at the time, and the nuptials were later erased. No legitimate divorce happened, with Ridge and Brooke remaining husband and wife.

Ridge’s current breakup scenario is vastly different, with Brooke’s actions pushing the love of her life past his breaking point. While Carter will likely be asked to file divorce paperwork, Ridge did not make that priority one.

Taylor is in a far different state of mind than when viewers last saw her in 2019. The character Allen now plays returned from Africa with a matured outlook on life. Her persona projected security, which led to her not engaging with Brooke about Ridge.

As part of Taylor’s transformation, with a wink given to the recast, she continues to slow-walk efforts to reconcile with Ridge. Taylor told him she does want to reunite, while also reinforcing that this post-Brooke moment does not mean she and Ridge will now reunite.

But the fans see momentum is clearly in Taylor’s favor on B&B.