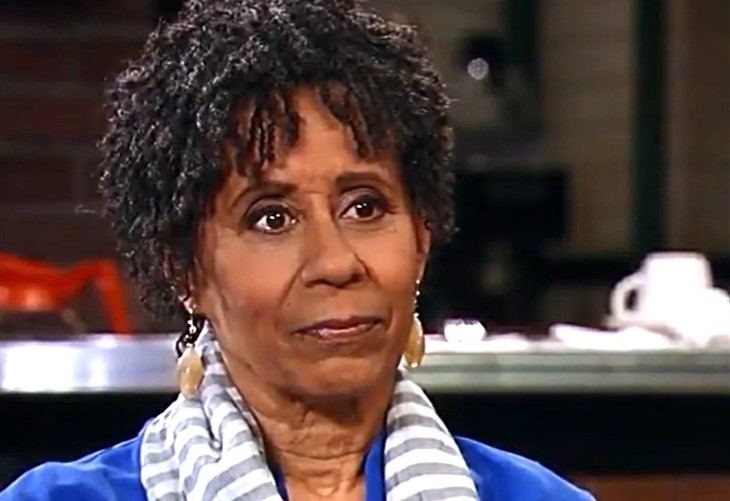 General Hospital (GH) spoilers for Tuesday March 1, 2022, tease there will be good ideas backfired, more brotherly advice, a couple of vacation plans made and a scary voice from the past in the next General Hospital!

General Hospital viewers know that Drew Cain (Cameron Mathison) pledged to help his buddy Curtis Ashford (Donnell Turner) help find out more about his returned from the dead father Marshall Ashford (Robert Gossett) and came up with an idea. At the Metro Court Drew agrees with someone about feeling exactly the same way; while Stella Henry (Vernee Watson) asks someone if they’re out of their damn mind at Charlie’s Pub!

General Hospital viewers will recall that Stella told Curtis to give his father time and he’d answer his questions in his own time; Marshall sees through Drew’s job offer and tells Drew he knows that Curtis put him up to it!

Chase still has questions about that for his older brother as he asks Finn what he wants him to do about it as the two still talk at the beach house they were living with Bailey Louise Jones (London and Jett Prinzo-Berendt) hiding her in plain sight.

Chase asks Finn what he wants him to do about it; meanwhile, Chase’s ex, Willow Tait (Katelyn MacMullen) is prodding Michael Corinthos (Chad Duell) to do something, telling him now’s the time as Michael asks for what. Michael will apologize to Chase and hopefully the two can now make amends.

At Charlie’s Pub, Curtis has some questions for Nina Reeves (Cynthia Watros), as he asks her what is going on with her, and what does it have to do with Sonny Corinthos (Maurice Benard)! General Hospital viewers know that Curtis is one of Nina’s true friends, and he can probably tell she’s gotten herself into a big mess once again! Meanwhile, Carly Corinthos (Laura Wright) is obviously ready to get away from the problems in Port Charles – namely, Nina and her canoodling with Sonny – along with Olivia Quartermaine (Lisa LoCicero) and Sam McCall (Kelly Monaco). The three women are planning an “escape day” together, and Carly asks if they’re really doing this, with Olivia answering “damn straight” – this should be an interesting and fun experience for the three of them and General Hospital fans!

GH Spoilers – Elizabeth Baldwin Is Rocked By Another Strange Incident

She hadn’t realized Betsy was in town, visiting Franco’s grave close to the anniversary of his death, and had talked to Scotty about the strange incidents and even asked if he thought Jake Webber (Hudson West) could be involved. Scott didn’t think so, and Elizabeth arrives home from her shift to yet another strange-and frightening, incident; a painting Franco had painted of her while they were still dating is on the fireplace mantel staring down at her!

In the preview, she is still staring up at the portrait when she hears someone behind her and wheels around backwards in terror; poor Liz!

Eastenders Spoilers: Gray Wakes Up in Hospital, Chelsea Gets Her Fire Back

The Bold And The Beautiful (B&B) Spoilers: Sheila Gloats…But Will She Slip Up?