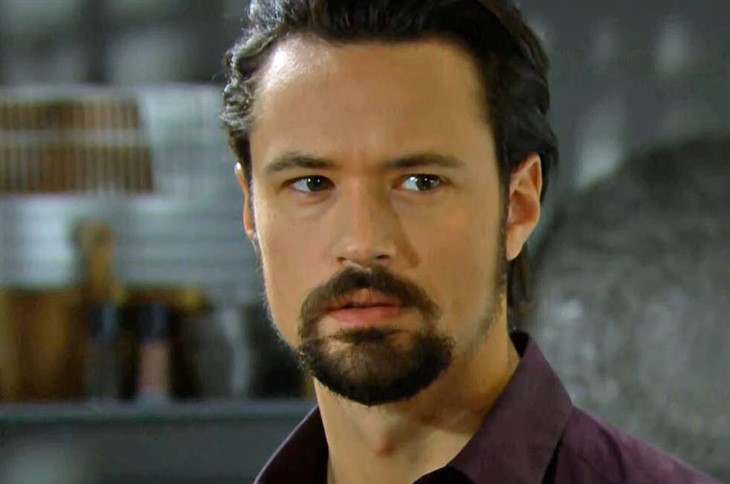 The Bold and the Beautiful (B&B) spoilers for Monday, August 15, 2022, reveal Thomas getting a reality check about the quest to make Douglas his own again.

Thomas Forrester (Matthew Atkinson) just really wants to be a full-time dad again and doesn’t think there is any reason that he shouldn’t be. After all, his disturbing behavior was caused by brain trauma and he has done everything in his power since then to live a better life on the up and up.

He is grateful for all that Hope Logan Spencer (Annika Noelle) and Liam Spencer (Scott Clifton) have given Douglas Forrester, but he feels he has every right to his son. In fact, he told Hope matter-of-factly that he wants Douglas to live with him expecting that Hope wouldn’t put up a stink.

On Monday, Thomas makes his feelings clear to his mother and sister, Taylor Hayes (Krista Allen) and Steffy Forrester (Jacqueline MacInnes Wood), but they have some warnings for him. Legally, Hope is Douglas’ mother because Thomas did sign those papers making her such.

Yes, he was under duress and not in his right mind, but he has to think of what a judge might say if Hope and Liam decide to challenge Thomas in court. Would Taylor be willing to go to bat for her son as a psychiatrist saying he is now in his right mind? After all, she didn’t judge Sheila Carter’s mind very well.

Speaking of Sheila Carter (Kimberlin Brown), the Forrester clan is still reeling at the fact that she seems to be gone for good this time. But could it really be true? Ryan Chamberlain’s (Jon Lindstrom) arm was found on General Hospital, but it wasn’t really his arm and he wasn’t really dead, so what does a toe mauled by a bear really mean?

Sheila has been dead before, but then it turned out she wasn’t really dead at all. Plus, Deacon Sharpe (Sean Kanan) is good at helping women fake their death. Something tells us we haven’t seen the last of this crazy woman. Stay tuned to The Bold and the Beautiful weekdays to see how these stories play out.