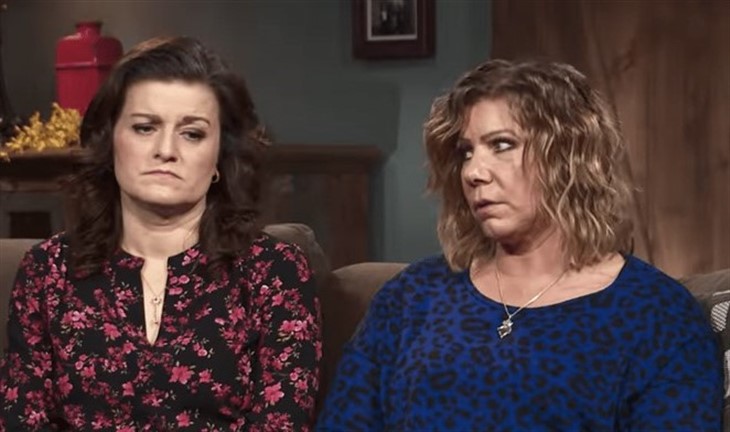 Sister Wives spoilers reveal that fans of the show have a lot of shocking theories about the relationship between Robyn and Meri Brown. With the new season coming up, fans have started to watch back previous episodes, and even though it may seem that they are not as close as they used to be, some fans think that have spotted the signs that these two are closer than ever.

Fans of Sister Wives are very excited to see what is next for the Brown family and this season may focus a lot on Christine Brown leaving the family. In the new trailer, there are plenty of signs that Meri and Robyn have gotten a lot closer to one another. There is one moment when they are together and Meri begins to cry to Robyn about how she isn’t ready to see Christine leave the marriage. Robyn then tells Meri, “Hang on with me, okay? We have to rebuild.” We see them hug and this is when fans were really taken aback. No one ever anticipated that their relationship was quite like this.

By watching this scene, fans of the show were quick to point out that this was a huge plot twist and they never thought that they would see Robyn and Meri embraced in this way! From what we have seen in this trailer, these two have become very close friends and they have started to lean on each other more without Christine. Could Christine leaving really help them to develop their friendship and change their opinion of one another?

Robyn has gotten a lot of hate and backlash from viewers because of how she is the favored wife. The plot twist that fans didn’t expect coming was the fact that Robyn seems to have changed her demeanor a lot and has opened up emotionally to Meri more. No one ever saw this coming and from what the trailers shows, there are even more signs that Robyn has started to develop her relationship with Meri and lean on her more.

Meri and Robyn may have quite a tangled relationship, but it looks as if they are ready to shower each other with hugs in order to repair their family. Perhaps they needed Christine to leave to show them what it feels like to lean on someone else for once.