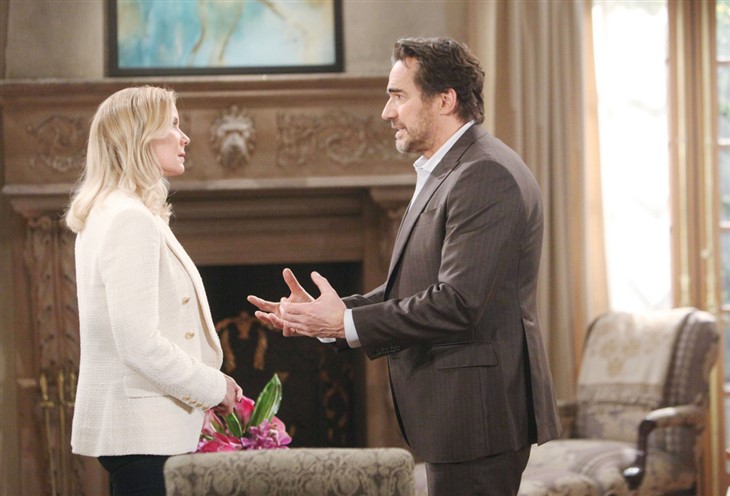 The Bold and the Beautiful spoilers document that Brooke Logan Forrester (Katherine Kelly Lang) is stunned to learn unrevealed details about Monaco. Ridge Forrester (Thorsten Kaye) is apparently attempting to preserve his marriage by coming clean.

Brooke has every right to be upset. Ridge lambasted her for months when he learned she kissed Deacon Sharpe (Sean Kanan) on New Year’s Eve in what was a Sheila Carter (Kimberlin Brown) plot.

The Bold And The Beautiful Spoilers – Staying With Brooke Logan Forrester

Ridge could easily stay with Brooke. She forgives him, and they go forward.

But how likely is it that Brooke will not confront Taylor and once again warn her to stay away from her husband. Lang’s character feels entitled to Ridge’s devotion, and she should, as long as they are married.

Ridge’s choice to divulge the truth appears to be a blend of him wanting to clear his conscience, while staying ahead of the story. He may be calculating that Taylor, Steffy Forrester Finnegan (Jacqueline MacInnes Wood), or Thomas Forrester (Matthew Atkinson) will spill the soapy beans if he did not tell Brooke the truth.

Ridge could have reconciled with Taylor if he had wanted to months ago. The fact that he did not implies or proves that his feelings are stronger for Brooke, or so it seems.

Taylor has a special place in Ridge’s heart. She the mother of three of his children and was someone he married before first marrying Brooke.

However, Taylor’s deference to Ridge could be interpreted as her approval for him doing whatever he wants. As Steffy told her mother, Taylor’s wait-and-see stance has not worked. Being patient has allowed Ridge and Brooke to remain together.

Bold And The Beautiful Spoilers – Ridge Forrester Makes The Choice?

Taylor’s referenced indefinite wait can not possibly endure forever. As for Brooke, she has been patient as well.

Part of Brooke’s approach involves her involvement with Deacon. While Ridge knows she does not love Deacon, Kaye’s character also understands Kanan’s alter ego is linked through Hope Spencer (Annika Noelle). So, Ridge’s annoyance will remain.

It appears that Ridge is consciously, or subconsciously hoping Brooke makes this decision for him. He does not have the heart to hurt Brooke or Taylor. But what if Lang or Allen’s character do not respond as he is used to on B&B?