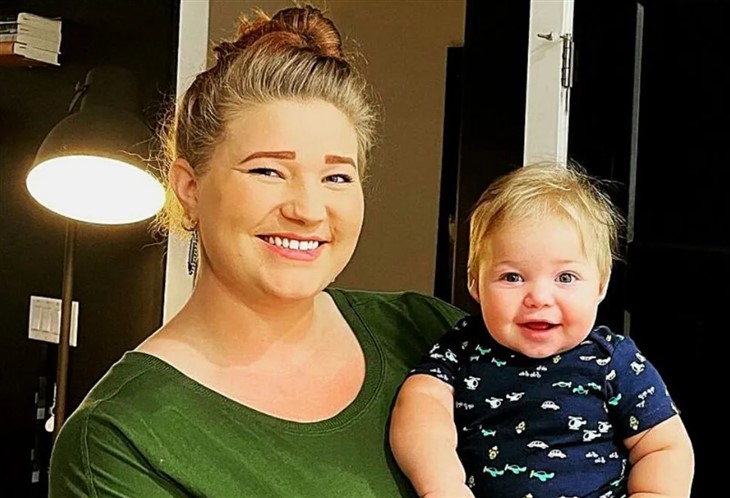 Sister Wives news reveals that star Mykelti Brown-Padron’s daughter Avalon has reached a major milestone, and her mom captured the event to share with fans. What is the little girl doing now that will bring a smile to your face?

She is almost walking all on her own, and she hasn’t even reached her first birthday. The 25-year-old Utah resident Mykelti is the fifth of the 18 Brown family siblings and she is the second eldest child of Kody Brown and Christine Brown.

Mykelti and her husband Tony Padron welcomed their daughter Avalon Asa Padron into the world last April. Luckily Mykelti has kept her fans in the loop as to her adorable daughter’s growth via social media. So when the blonde-haired, blue-eyed baby started to walk, Mykelti recorded the special moment for her fans.

Today Mykelti shared the clip on her Insta, with the caption, “My baby girl Miss Avalon is amazing and walking.” Fans can see Tony holding Avalon on his lap and when he puts her feet on the floor mom Mykelti tells her to walk toward her. Mykelti says, “Come here, baby girl! Avalon, come to mama! Come to mama!”

Dad Tony was not sure about letting go of Avalon’s arms, but when he did Avalon showed that she is growing by leaps and bounds. Left to her own devices, Avalon took three steps by herself. As she made her way to her mom the baby was obviously pleased with herself.

Mykelti told Avalon, “Come on gorgeous, you’re so amazing!” And then the tot fell down on her bottom with dad saying, “Oh, so close!”

Mykelti’s pregnancy with Avalon was featured on Season 16 of Sister Wives, and her gender reveal was filmed at Christine Brown’s former home in Flagstaff, Arizona. The episode was unintentionally funny when Mykelti mixed up the recipe for a substance that would indicate the gender and instead of blue or pink it turned out, um, tan!

Christine was in on the gender however, and she saved the day with her pink t-shirt and sign announcing, “It’s a girl!”

Will Mykelti’s home birth be featured on Sister Wives? Chances are good that Avalon will indeed be introduced in next season’s episode.

Be sure to catch up on everything happening with Sister Wives. Come back here often for Sister Wives news and updates.