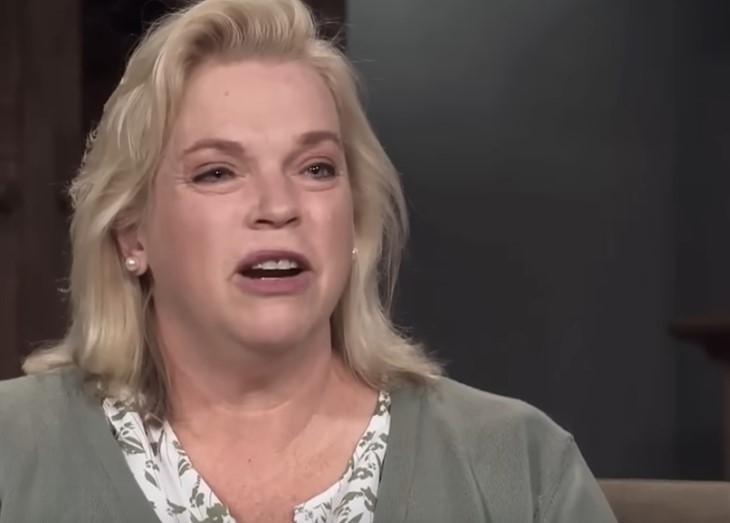 Sister Wives spoilers show that Janelle Brown has become the newest wife to question patriarch Kody Brown’s behavior. And Janelle also revealed exactly what Kody did that upset her. But will the Sister Wives patriarch convince her in his favor?

Find out what Janelle just shared that could provide Sister Wives’ newest shocker. And learn if Kody came up with a response to her concerns. Get all the details below!

Will Kody Brown ever learn to think about his wives’ reaction before he speaks or takes actions? So far, it seems like the Sister Wives patriarch either doesn’t care or has become too clueless to even guess how his wives might react. And now Janelle Brown has become the newest wife to turn on her husband, according to a Yahoo teaser.

As a result, Janelle shared her questions in a Sister Wives confessional. And the Sister Wives star shared that she has begun wondering if her marriage to Kody can last. “I never thought I’d be in a place where I would be questioning my relationship,” admitted the 53-year-old about her marriage.

However, Janelle shared that Kody’s actions have made her increasingly worried about their relationship. And she even wondered if the marriage can last much longer. But she also shared lessons learned through life with Kody.

And the Sister Wives star revealed that the past few years provided a turning point. As she looks at the changes in her life, Janelle admitted her key question. And she shared that in “the last few years, I’ve began to wonder if we’re compatible any more. Maybe this doesn’t work anymore for me, I don’t know.”

But Janelle also responded to those who think that she does whatever Kody decrees. And the Sister Wives star noted that she “made decisions for [herself]” during her marriage. As a result, Janelle shared a lesson she learned. “You cannot depend on your husband to meet all of your needs,” she warned.

But then the Sister Wives star spilled on more complicated relationship concerns. For instance, Janelle pointed to Kody’s detailed COVID-19 rules for everyone. And she also attacked how Kody allegedly has favored Robyn Brown, his fourth wife.

As Janelle reflected on what Kody says about Robyn, her frustration became clear. And she declared, “All I’m hearing is Robyn is perfect. Robyn is great. Robyn treats me the way I’m supposed to be treated,” claimed Janelle. “Everybody’s gotta conform. That’s not what I signed up for.”

But Kody refused to let Janelle become the only one with complaints. And he reacted. In the Sister Wives patriarch’s eyes, Janelle’s comments showed zero respect toward him. And Kody also insisted that all his actions represent his goal of protecting his clan.

After whining about Janelle’s “lack of respect” toward him and his “desire to protect the family,” the Sister Wives patriarch issued an “invitation” to Janelle. And he invited her “to get to a place where you and I have that kind of loyalty. And we negotiate, and we work out these things like a married couple.”

However, Janelle claimed that she feels Kody should not question her loyalty. And in a teaser from a future episode, Janelle insists that the Sister Wives patriarch remains her “best friend” and the “person [she wants] to tell everything to.” But Kody doesn’t feel so certain. And he expresses concern about their relationship.

Tell us what you think. Do you feel that Kody fails to consider all his wives equally and favors Robyn Brown? Or do you think Janelle needs to show more loyalty? And after you share your views, check back on our site for more reality TV news.