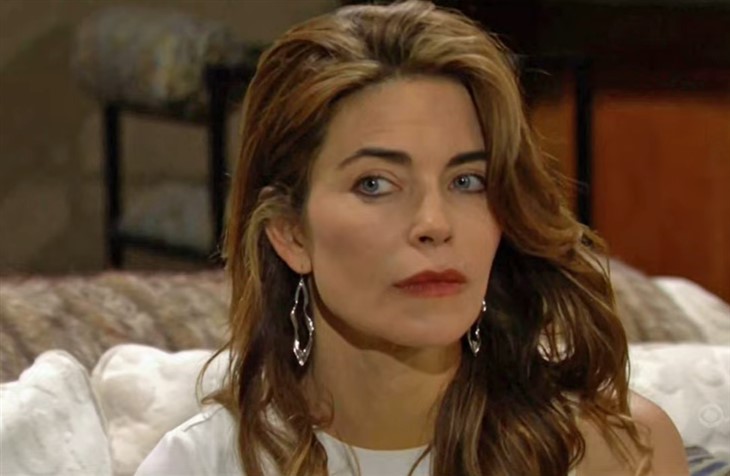 The Young and the Restless spoilers reveal that Victoria Newman (Amelia Heinle) told Ashland Locke (Robert Newman) they would take the $500 million and leave Genoa City together. It is also confirmed that Victoria gets in a car accident during the week of April 18. Both of these storylines have fans wondering if Heinle is leaving. Here is the information that is known so far.

The Young And The Restless Spoilers – Adam Newman’s Curveball

Y&R spoilers reveal that Victoria’s big plan has faced several obstacles. Once again, Victoria has tried to work around them. Most recently, Adam Newman’s (Mark Grossman) offer to Ashland caused complications for both Victoria and Victor Newman (Eric Braeden).

In the end, Victor decided to pay Ashland $500 million if he gave up Newman-Locke and gave Victoria an annulment. Victor wasn’t happy about it and predicted Ashland would throw a curveball.

In Monday’s episode, Ashland signs the agreement and Victor transfers the money. Then, Ashland rushes to get Victoria so they can leave Genoa City together. Once Victor texts Victoria to tell her the company is safe and she’s free, Ashland gets blindsided. Victoria sneers at Ashland while telling him that she’s not going anywhere.

The Young And The Restless Spoilers – Victoria Newman’s Car Accident

The Young and the Restless spoilers for the week of April 18 tease there will be a car crash. The weekly preview confirms Victoria is talking to Victor and Nikki Newman (Melody Thomas Scott) while driving. Suddenly, Victoria swerves and tries slamming on her brakes. However, she crashes. All Victor and Nikki can hear is Victoria screaming.

The car crash has fans wondering if Victoria is being written off the soap. It’s not likely that Victoria changed her mind and was racing to catch up to Ashland. The calm looks on Victor and Nikki’s faces indicate everything is good. Of course, Victoria could be giving her parents a cover story.

In any case, Victoria will crash, and it is teased that Rey Rosales (Jordi Vilasuso) is also driving on that road. It is suggested that Rey dies in the crash. What about Victoria, though? Spoilers confirm Victoria is still alive and in Genoa City. According to TV listings, Victoria adjusts to her new normal after Ashland is given his marching orders. This scene airs on Friday, April 29, several days after the car crash.

It doesn’t sound like Heinle is leaving the soap. However, anything can happen. So, keep watching and we will keep you posted with updates as they become available.