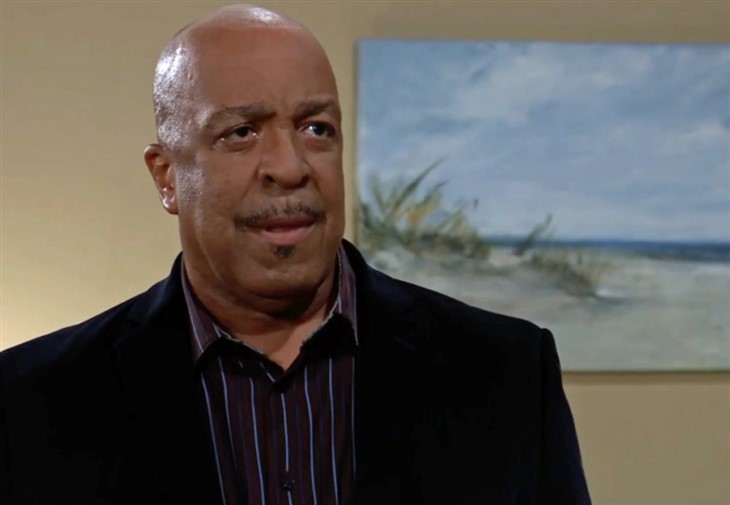 General Hospital viewers will remember Drew Cain (Cameron Mathison) proposed a position with Aurora to Marshall Ashford (Robert Gossett); a music concierge; Marshall balked at the background report part of it and declined the offer, and he gives Curtis Ashford (Donnell Turner) a quick call.

He arrives, and Curtis wants to know why he wanted to meet him, and Marshall tells him he knows what he did and that digging up his past may not be safe- General Hospital viewers see that Marshall is giving the same old story to Curtis!

Curtis just wishes his father would open up a little more and at least explain why it wouldn’t be safe!

General Hospital viewers will recall from yesterday’s episode of General Hospital that Elizabeth Baldwin (Rebecca Herbst) was scared out of her wits when she was greeted with a portrait of herself Franco Baldwin (Roger Howarth) painted of her when they were dating!

The police were called, and Dante Falconeri (Dominic Zamprogna) came to investigate along with some other forensic detectives. Dr. Hamilton Finn (Michael Easton) rushed over at Elizabeth’s call and decided to camp out at her place until the situation is resolved. As a result, Jake Webber (Hudson West) arrives home to a lot of questions.

Elizabeth confronts Finn about all the questions for Jake and he asks if she really thinks she’s accusing her son? Does Jake act guilty of all the stalking-like incidents related to Franco?

General Hospital viewers will recall that Mac Scorpio (John J. York) has been chomping at the bit to get back to work at the PCPD, but he hasn’t been cleared for duty yet.

General Hospital viewers will see Anna Devane (Finola Hughes) explain that the investigation hasn’t quite been wrapped up yet, and of course Mac will want to jump right back in! A stern Felicia Scorpio (Kristina Wagner) points out to Mac as she points her finger in his face that he has to answer to her first!

Mac will just have to simmer down and wait until he is healed up enough to go back to crook chasing and crime busting, and if Felicia has anything to say about it, that might be a while!

Off duty, General Hospital viewers see that Dante is bringing his work home – well, sort of – as he sits in a restaurant talking to Sam McCall (Kelly Monaco) about Elizabeth’s situation.

Dante tells Sam he thinks that Elizabeth has a stalker; General Hospital viewers would agree, but who has been coming back and forth inside her house with a key and who would have gotten Franco’s portrait of her out of the studio before the fire?

Harrison Chase (Josh Swickard) had the right idea when he suggested to Finn in a previous General Hospital episode that the police could pull security footage at least of the times she found the ring in her locker and the shredded wedding dress! Dante will likely get that process started through PCPD channels soon!

He approached Maxie and asks if she has room in her heart for that, presumably talking about the baby he delivered in the woods around nine to ten months ago as Bailey Louise looks at her mom! This will be the first time Austin has had a chance to catch up with Maxie and Bailey since they returned to Port Charles.

Also happy someone has returned to Port Charles, Portia Robinson (Brook Kerr) sits with Drew at the Metro Court and makes small talk; she asks him if something was business or personal!

The Bold And The Beautiful (B&B) Spoilers: Is It Time For A Taylor And Brooke Cat Fight?