GH Spoilers Wednesday, January 5: Will Tracy Spill The Bailey Louise Secret To All? 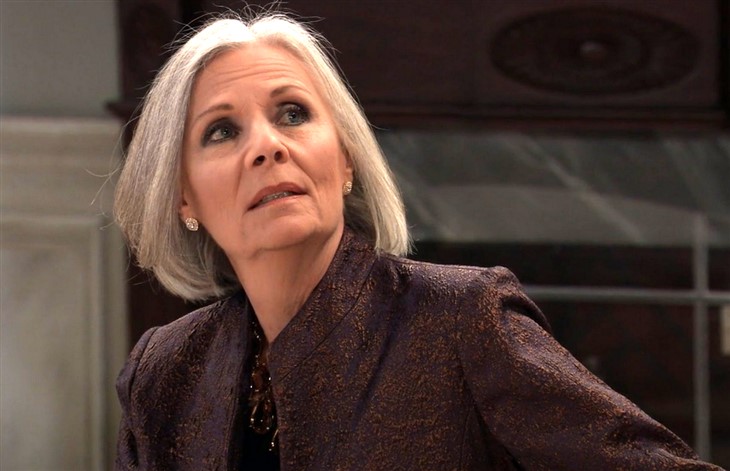 Tracy Quartermaine (Jane Elliott) kept her mouth shut until she was alone with Brook Lynn Quartermaine (Amanda Setton) and asked her why she is still pretending this baby is hers. She never bought Brook’s pregnancy act and Brook calling around asking if someone in her family could lend her a baby probably didn’t help her situation.

It becomes clear to Tracy that Brook found her loaner baby, but she doesn’t yet seem to know the little girl belongs to Maxie Jones (Kirsten Storms). As Brook tries to cover for herself, she just looks more suspicious to Tracy.

Meanwhile, Robert Scorpio (Tristan Rogers) delivers the news about Luke Spencer (Tony Geary) to Anna Devane (Finola Hughes), Maxie, and Felicia Scorpio (Kristina Wagner). When Maxie and Felicia are alone, they finally discuss how Maxie doesn’t act like a woman whose baby has been kidnapped. Maybe that is the clue everyone should be looking at and should have been looking at this whole time.

And things are about to get even dicier for Maxie as Peter August (Wes Ramsey) is sadly awake and able to speak again and is looking for a good lawyer.

While Brook Lynn tries to deal with Tracy’s questions in the living room, Michael Quartermaine (Chad Duell) and Willow Tait (Katelyn MacMullen) battle it out in the kitchen. They have yet another disagreement about Nina Reeves (Cynthia Watros) and Wiley that Harmony (Inga Cardranel) thinks she can solve.

She stops by and asks Willow to use her own mind and Michael asks how anything going on is her business. Michael needs to start acting like a more respectful human.

Alexis Davis (Nancy Lee Grahn) is still trying to find the right new career after realizing the criminal background check would preclude her from teaching law. She is not sure she can be a journalist like Shawn Butler (Sean Blakemore) wants, but Sam McCall (Kelly Monaco) encourages her mother to do it.

Elsewhere, Victor Cassadine has a word with his newfound son, Valentin Cassadine and Val wants nothing to do with him, ever. That prompts a sly Victor to tell him never say never. Stay tuned to General Hospital weekdays to see how these stories play out.

Days Of Our Lives Spoilers: With No Sami, EJ Is Ready To Settle For Nicole