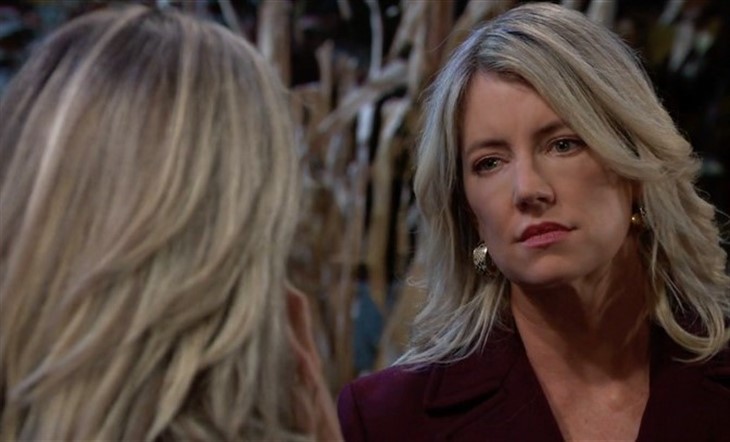 General Hospital (GH) spoilers for Wednesday, January 19, 2022, reveal Carly being her usual self and yelling at someone she never expected to see.

General Hospital Spoilers – Who Is That Knocking At Carly Corinthos’s Door?

Carly Corinthos (Laura Wright) is angry. Very angry. And she will tell anyone who will listen how angry she really is. Most of her anger is directed towards Nina Reeves (Cynthia Watros) and from the looks of things, it seems Nina will pop by Carly’s Metro Court hotel room on Wednesday to see if she really did indeed move on out of Sonny’s (Maurice Benard) house.

Carly tells her visitor she doesn’t have words for how messed up this entire situation is but clearly, she does have words because she is talking. It looks like Nina really wants to feel out the situation so she will know if Sonny will come around looking for her any time soon.

Speaking of Sonny, he spends some time at his own boxing gym and has another talk with Dante Falconeri (Dominic Zamprogna)? Will Dante notice his dad is off his meds? He seems more astute at these things than the rest of Sonny’s family.

Harrison Chase (Josh Swickard) doesn’t realize that the walls sometimes have ears nor does he realize that Brook Lynn Quartermaine (Amanda Setton) is pretty good at eavesdropping, so maybe he should not have said all the things he said about her to Dante.

Now, BLQ wants him to go, but also doesn’t want him to go, and she is all confused and tells him just that. Will those two get it together already or will Brook Lynn never take that blazer off and give us some true ABC love in the afternoon?

Curtis Ashford (Donnell Turner) just found out his father is alive and now he’s being called to the hospital because Marshall Ashford is in trouble and Portia Robinson (Brook Kerr) wants him there right away. As Curtis awaits word on Marshall, TJ Ashford (Tajh Bellow) does his best to save the man.

The two people who got Marshall to GH quickly, sadly had their date interrupted, so now that they didn’t declare someone dead who is not dead, Hamilton Finn (Michael Easton) and Elizabeth Webber (Rebecca Herbst) contemplate finishing their date. Stay tuned to General Hospital weekdays to see how these stories play out.