GH Spoilers Wednesday, February 2: Does Sonny Have Carly Right Where He Wants Her? 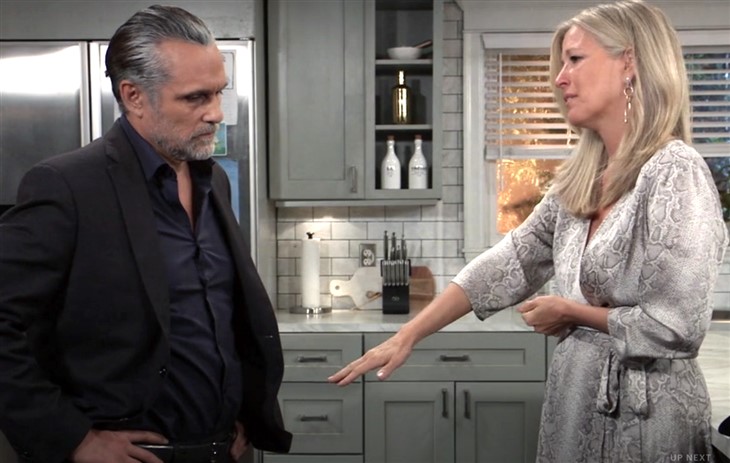 General Hospital (GH) spoilers for Wednesday, February 2, 2022, reveal Sonny and Carly finally starting to hash it all out, but will something come between them once again?

Despite Drew Cain (Cameron Mathison) describing how Sonny Corinthos (Maurice Benard) was acting at The Savoy, Carly Corinthos (Laura Wright) still hasn’t put two and two together and come up with her husband being off his meds. She is just mad that he didn’t want to give her space. Now that Sonny is back on his meds, Carly insists they talk in the Quartermaine kitchen.

During that talk, Sonny tells Carly all about his plans for a grand gesture to show her how much he loves her and it looks like Carly is actually receptive to hearing him out. Will the subject of Nina Reeves (Cynthia Watros) come up and if it does, will that cause Carly to yell and scream and run again?

When Tracy Quartermaine (Jane Elliot) tried to pawn the Ice Princess off on Laura Collins (Genie Francis), Laura didn’t want it, but did Tracy know it was fake? Did Luke even know it was fake? Well, Ned Quartermaine (Wally Kurth) wants to know if the FBI had been targeting his mother all along. This looks to be how GH is writing off Tracy and Jane Elliot once again, but there was someone else also interested in that diamond.

General Hospital Spoilers – Spencer Cassadine Is Off To Jail

It’s time for Spencer (Nicholas Chavez) to leave for Spring Ridge, but he still has that Ice Princess on his mind and wants to touch it just once. Well, that may have to wait the 30 days he lingers in Hotel Jail. On Wednesday, he gathers at Kelly’s to bid farewell to his family and friends. Will Trina Robinson (Sydney Mikayla) show up or will Ava Jerome (Maura West) detain her with questions about the cabin trip?

Speaking of Hotel Jail and friends that were made there, Harmony (Inga Cardanel) visits Alexis Davis (Nancy Lee Grahn) and needs a favor. She is also worried that when Alexis hears what she has to tell her, she won’t want to talk to Harmony ever again. Something tells us this has to do with Willow Tait’s (Katelyn MacMullen) birth certificate and could reveal some very interesting things about where Willow really came from… Stay tuned to General Hospital weekdays to see how these stories play out.