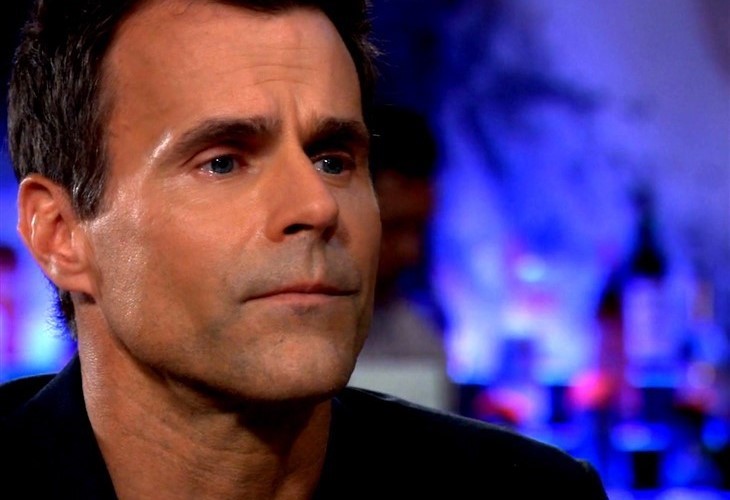 At the Savoy, Drew Cain (Cameron Mathison) talks to Portia Robinson (Brook Kerr) about the effects of Marshall Ashford’s (Robert Gossett) plans on his son. Drew tells Portia the less she knows, the better; previous GH episodes revealed that Marshall has a serious mental disorder and has planned to leave Port Charles. Curtis Ashford’s (Donnell Turner) efforts to look into his father’s past with Selina Wu’s (Lydia Look) help didn’t bring the answers he expected!

Ava Cassadine (Maura West) looks like she’s all dressed up for a date, but she’s not with her husband! She has a big smile on her face, obviously enjoying herself as she tells Dr. Hamilton Finn (Michael Easton) it’s never too soon to enjoy the finer things in life! Ava is obviously used to enjoying those finer things as she is dressed to the nines and the two have run into each other at a nice restaurant. Perhaps she’s giving Finn some advice about what she thinks Elizabeth Baldwin (Rebecca Herbst) might like since in upcoming GH episodes he’ll want to take her mind off things! Elizabeth has been under a lot of stress lately and of course Finn wants to help!

General Hospital Spoilers – Why Would You Say Something Like That?

Maxie Jones (Kirsten Storms) and Brook Lynn Quartermaine (Amanda Setton) look like they’re about to get into an argument as Maxie is noticeably annoyed with her! Maxie demands of Brook Lynn why she would say something like that – but wind up questioning Austin Gatlin-Holt’s (Roger Howarth) intentions! Previous GH episodes revealed that Brook Lynn and Austin haven’t had the smoothest of family relationships, with Brook Lynn not even accepting his relation to the family.

It sounds like Austin again may be a point of contention as Brook Lynn looks shocked, but on the other hand, maybe it’s Austin who Maxie is talking to! He’s making himself awfully invisible in this scene if it is!

GH Spoilers – Someone Got A Beating

Someone got a bad beating and Detective Dante Falconeri (Dominic Zamprogna) was called to investigate the case the victim is unrecognizable! The man lays bruised and beaten as Dante bends down close and asks with compassion who did this to him?! The man is lying in a bed at General Hospital and Dante acts as he knows him but who could he be? Dante may be wondering if the men who robbed Charlie’s Pub and who are out on bail did this to the man and why! He’ll hope Sonny Corinthos (Maurice Benard) isn’t sending enemies to the Pine Barrens again!

General Hospital Spoilers – The Kind Of Emptiness That Never Goes Away

A worried Nina Reeves (Cynthia Watros) talks to Brando Corbin (Johnny Wactor) about the pain she sees in Sasha Gilmore Corbin (Sofia Mattsson). It was obvious that Nina still thinks of Sasha as a daughter when she tried to convince her that their baby’s death was not her fault. She tells Brando that it’s the kind of emptiness that never goes away, and she would know, having believed her baby died for many years!

Brando looks just as worried as Nina does, being unsure how to comfort his wife who much of the time denies her grief! Little do either of them know yet that Sasha’s been back on pills to cope with life!

GH Spoilers – Why The Sudden Interest?

Curtis and Sonny appear to be in Voloinino’s Gym as they talk about Marshall and his mental illness problems. Sonny understands more than anyone what that can do to a person, and wants to help. Curtis asks why the sudden interest, and that may be because word has gotten back to Sonny about Marshall’s plans to leave town. Sonny knows that Marshall has a schizoaffective disorder because he’s seen his medication bottle and recognized the prescription!

At Rana Point, Alexis Davis (temporarily Stephanie Erb) has been trying to talk Harmony Miller (lnga Cadranel) down, and save Carly Corinthos (Laura Wright)! Harmony’s like a wounded animal and screams that she won’t let them take Willow Tait (Katelyn MacMullen) away from her! Carly needs medical attention, having been injected with a drug, likely the same one that killed Neil Byrne (Joe Flanigan)!

Carly was unconscious in the trunk of her car as Alexis reached the cliff, with Harmony ready to set the car to crash into the harbor below! Will Alexis be able to calm the desperate woman down in time to save Carly?